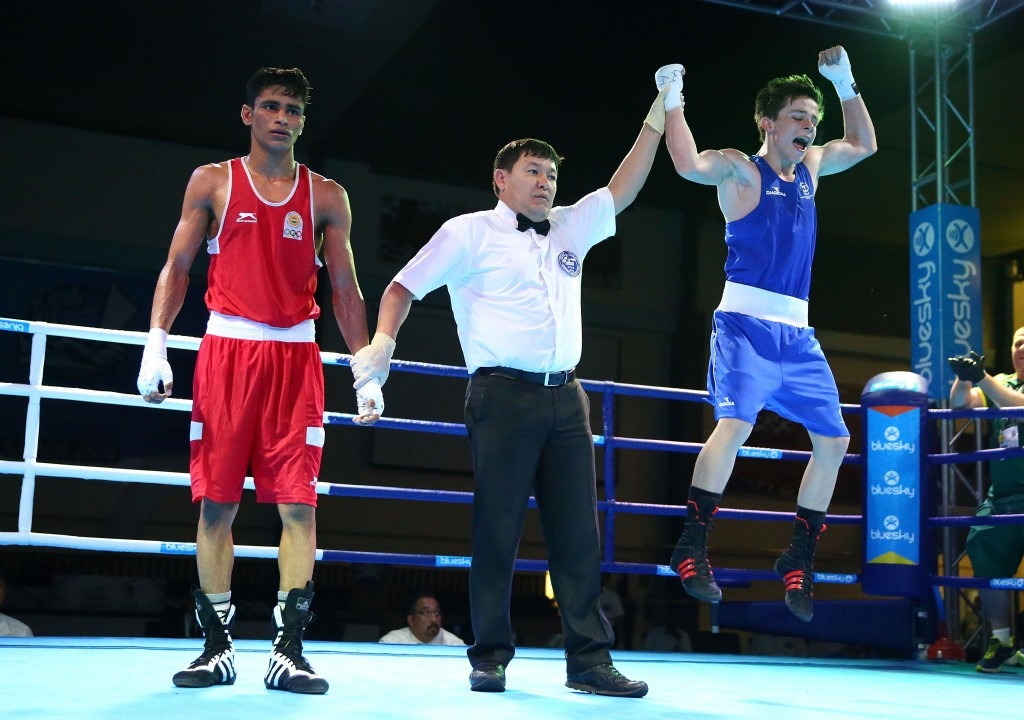 Bowen produced arguably the shock of the event so far by claiming a split decision victory, prompting the Australian to cry tears of joy once the result was announced.

Samoa picked up another bronze in the category thanks to Ioane Ioane, while England’s Brandon Daord was also able to clinch a podium spot.

Northern Ireland’s Aidan Walsh was in outstanding form as he denied the Isle of Man, hosts of the 2011 Commonwealth Youth Games, their first gold of the competition by proving too strong for Mathew Renie, sealing victory by virtue of a unanimous decision in their light welterweight bout.

The result ensured he went one better than sister Michaela, who suffered defeat in the women’s flyweight division at the hands of Olympic champion Nicola Adams at the 2014 Commonwealth Games in Glasgow.

Scotland’s Kieran McMaster added to his nation’s medal tally with bronze and Prayag Chauhan also earned a spot on the podium for India.

Pacific Games champion Thadius Katua of Papua New Guinea had opponent Tiernan Bradley on the canvas in the opening round but the Northern Irish fighter proved he was made of stern stuff, battling his way back into the bout before succumbing to a split decision defeat.

The bronze medals in the category went to Iosefo Folesi of host nation Samoa and England’s Dalton Smith.

Rajab Otukile Mahommed of Botswana and Leichomblam Bhimchand Singh of India were the two boxers to earn a podium spot by securing a bronze medal apiece.

The last Northern Irish triumph came in the bantamweight division thanks to James McGivern, who got the better of Scotland’s William Stuart, taking gold by virtue of being awarded the fight on all three judges’ scorecards.

Emmanuel Ngoma pocketed Zambia’s first medal of Samoa 2015 with bronze, with the other being won by Australia’s George Payne.

Scotland were able to emerge from the boxing tournament with a decent haul of two titles as Sean Lazzerini was the only fighter to secure victory by technical knockout on a night where the majority of the finals went the distance.

The gulf in class between Lazzerini and opponent Antonio Kanongata’a, who reached the gold medal bout thanks to a bye in the semi-final, was obvious from the start and the Tongan lasted just two minutes as the Scot romped to a convincing win.

Samoan John Peneueta was the only bronze medallist in the category owing to a lack of entries.

John Docherty sealed Scotland’s other gold as he beat England’s Benjamin Whittaker after the judges awarded him the middleweight bout via a split decision.

Cyprus were another nation to stand on the podium for the first time today as Antreas Kokkinos took home bronze, with the other in the category going to Christopher Alberte of Mauritius.

England may have come into the Commonwealth Youth Games boxing tournament with high ambitions but they had to settle for a solitary title, won by welterweight Mohammed Harris Akbar as he denied Northern Ireland another gold by overcoming the tough challenge posed by Brett McGinty.

Jack Gipp boosted the Australian Samoa 2015 haul with bronze, while Daniel Bonne of the Seychelles’ third-place finish finally got his nation onto the medal table.