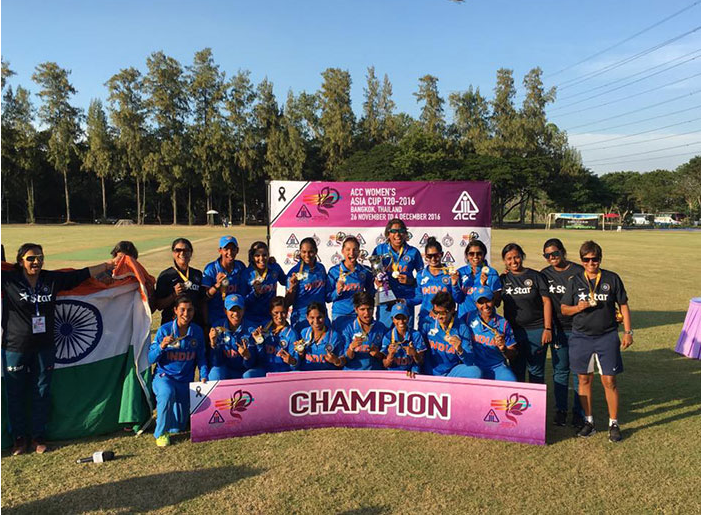 India continued their winning streak in the Asian Cricket Council’s Women’s Asia Twenty20 Cup after defeating Pakistan by 17 runs in the final, played in Thailand today.

Mithali Raj hit 73 not out, her tenth T20 half century, to help her side reach 121 for 5 in the first innings before tight bowling limited their opponents to 104 for 6 in reply, handing India their sixth consecutive title.

Raj’s knock, her T20 career best, saw her earn the player-of-the-match award and she was also named as the tournament’s best player, having scored 220 runs at an average of 110.

She provided the glue to India’s innings after they won the toss and elected to bat, with Jhulan Goswami being the only other player to reach double figures, being caught by Javeria Wadood off Sana Mir’s bowling for 17.

Anam Amin was the pick of the Pakistani bowlers, finishing with two for 24 from her four overs.

Following their economical bowling, Pakistan made a good start to their response and reached 56 for two during the tenth over.

However, just before the halfway point, Bisht’s slow left-arm spin got Wadood out for 22 and from here, the Indians tightened proceedings up, preventing their rivals from hitting the accelerator.

The next three wickets were lost for just 25 runs with Bisht claiming another victim and Anuja Patil and Preeti Bose also getting scalps.

Bisht ended with figures of two for 22 from her four overs.

Along with the finalists and the host nation, Bangladesh, Sri Lanka and Nepal took part in the competition, which started on November 26.