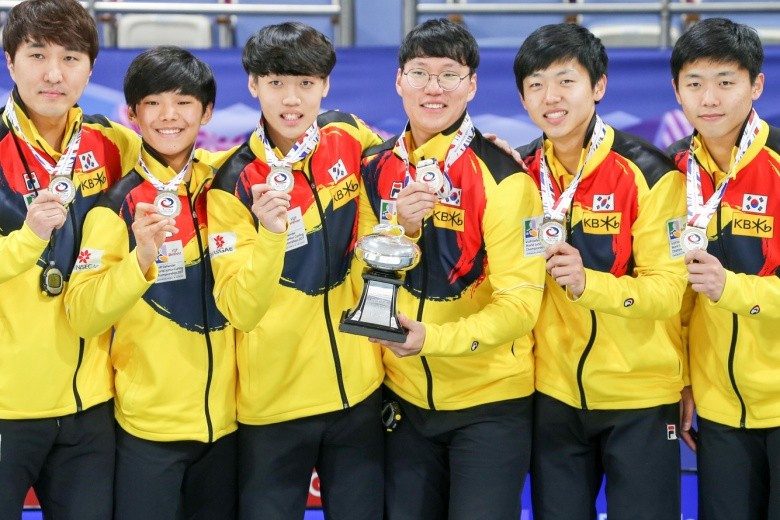 South Korea claimed an emphatic gold medal at home today as they defeated the United States in the men's final of the World Junior Curling Championships in the Gangneung Indoor Ice Rink.

The game opened with four blank ends and it was the Koreans – skipped by Ki Jeong Lee and made up of third Ki Bok Lee, second and vice-skip Yu Jin Seong, lead Jeong Uk Choi and alternate Gyeong Ho Woo – who opened the scoring with a single point steal in the fourth end.

The US, led by Andrew Stopera, took the lead with two points in the fifth end through a gentle tap-back by the skip.

After blanking the sixth end Korea took a 3-2 lead in the seventh end and built on that with a single-point steal in the eighth, for 4-2.

The Americans came right back to level the score at 4-4 in the ninth end before Lee played a decisive hit which stayed in position to score the one point that gave his team and his country the title at the tournament which is acting as a test event for the Pyeongchang 2018 Winter Olympics.

“We played the US in the previous rounds and we lost, so we wanted this win very badly, we really wanted to win this gold," said Lee.

"We could not have done this without the fans, the support from our parents and our coaches, so we really want to thank them – we are so ecstatic in winning gold.”

In the bronze medal final between Norway and Scotland, the Norwegians built up a 7-0 lead with steals in each of the first three ends on the way to a 10-3, eight-end win that secured their position on the podium.

During the Closing Ceremony, the tournament's Sportsmanship Award winners were announced.

The prizes are given to those “who exemplify the traditional values of skill, honesty, fair play, sportsmanship and friendship in the world of curling”, and are voted for by the other players.

Also, at the conclusion of the championships it was confirmed that the 2018 edition of the tournament will be held in Aberdeen, Scotland between March 3 and 11, 2018.

Sweden won the women's title yesterday with a 10-7 win over Scotland.