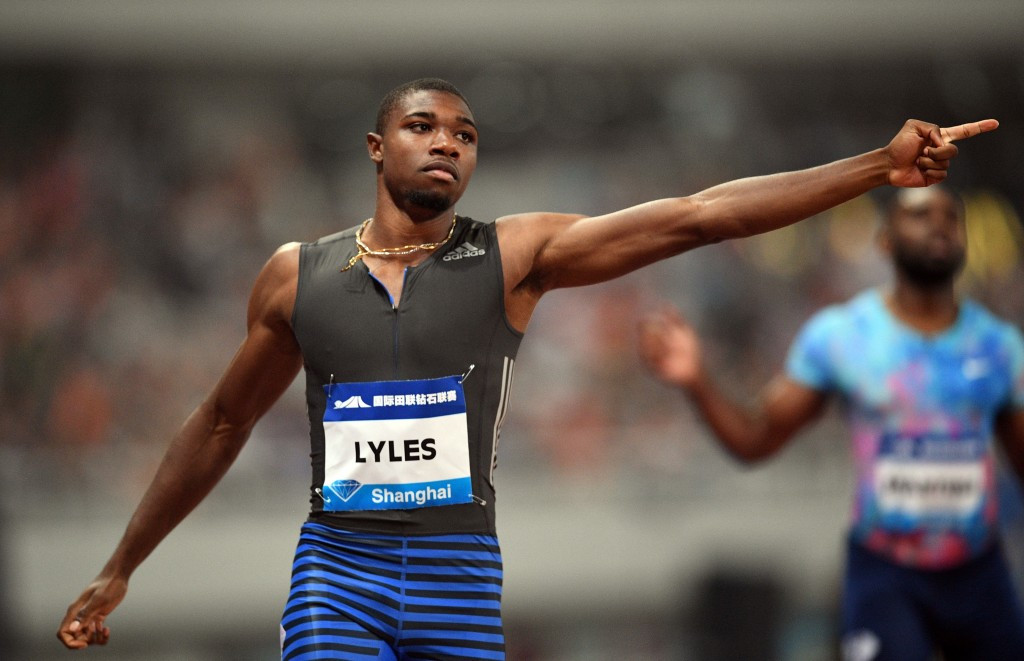 Noah Lyles of the United States and Kenyan Kipyegon Bett produced the headline performances at the International Association of Athletics Federations (IAAF) Diamond League event in Shanghai as the teenagers claimed victories today.

A little earlier in the Shanghai Stadium, Bett, who is also 19, surged past his fading  Kenyan team-mate David Rudisha, the double Olympic and world champion, during the race on his way to winning the 800m in 1:44.70.

“I spoke to my coach before the race and he told me to work on my positions which I managed to do.

“I have come off running a good indoor season and at the World Relays.

“The expectation for the rest of the season is to focus on the 200m - I think that is my strong suit.

“I next plan to run in the Diamond League in Rome and the Adidas meet then it is on to US Trials.

“I'm certainly excited by my start to the season and I hope there is more to come.”

Bett also put in an inspired display around the track as he got past Rudisha and held onto the lead.

In the end, Rudisha had to settle for fourth place, recording a time of 1:45.36, as two other Kenyans, Robert Biwott and Ferguson Rotich, came second and third respectively.

The night was also lit up by blistering quick performances from Olympic champions Elaine Thompson and Shaunae Miller-Uibo.

Thompson clocked 10.78 in the women's 100m as the Jamaican become the year's world leader.

She finished well clear the US' Torie Bowie, the Olympic silver medallist over the distance, as she got over the line in 11.04 while Marie-Josee Ta Lou of the Ivory Coast came third a further 0.03 behind.

“I am pleased with the time.

“My aim now is to go back home and compete in the Jamaica Invitational later this month.

“From there it is all about preparing for the rest of the season and the World Championships.”

Miller-Uibo, who is from The Bahamas, also went top of the early season rankings with her time of 49.77, putting her 0.97 clear of US sprinter Natasha Hastings.

South African long jumper Luvo Manyonga produced jumps of 8.48, 8.49 and 8.61m, all stadium records, on his way to victory.

His sixth effort to set a Diamond League record.

US Olympic champion Jeff Henderson was a distant sixth with 8.03m.

The concluding 110m hurdles was won as expected by Jamaica’s Olympic champion Omar McLeod, who clocked 13.09.

Russia’s world champion Sergey Shubenkov, competing under a neutral flag, finished fifth in what was his first international race for a year.

The expected duel between Olympic pole vault gold and silver medallists Thiago Braz and Renaud Lavillenie never took off, as the Brazilian failed at his opening height of 5.70m.

Home shot putter Lijiao Gong, the London 2012 silver medallist, had expressed doubts over her form ahead of the meeting, but she rose to the challenge to win with 19.46m.

Hopes of a second Chinese victory in the field were quashed by Qatar’s Mutaz Essa Barshim as his effort 2.33m in the men's high jump pushed Wang Yu, who recorded a best mark of 2.30m, into second.

The experimental discus competition, which had alternating throws from male and female competitors, saw victories for Croatia’s double Olympic champion Sandra Perkovic, whose best was 66.94m, and Belgium’s Philip Milanov, who reached 64.94m.

Kenya’s Olympic 1,500m champion Faith Kipyegon produced the fastest time run so far this season as she won in 3:59.22.