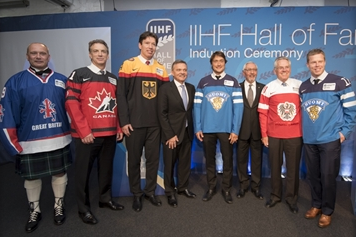 The induction ceremony was held at the German Sport and Olympic Museum in Cologne, as the IIHF World Championships drew to a close in the city.

Sweden were crowned winners after beating Canada in a shoot-out.

Ruggiero, who was part of the gold medal winning American team at the 1998 Games in Nagano, is the chair of the International Olympic Committee (IOC) Athletes' Commission.

The 37-year-old also won two Olympic silver medals and one bronze during her time on the ice, as well as securing four World Championship titles, before she embarked on a career in administration with the IOC.

Ruggiero was unable to attend the ceremony after her father Bill died suddenly.

Krupp was present for his induction in his home city, with his achievement in the National Hockey League (NHL) receiving praise.

He became the first German competitor to win the NHL Stanley Cup in 1996 as he scored the crucial goal in Colorado Avalanche's victory against the Florida Panthers.

Krupp also represented his country at the 1998 Olympics before going on to coach the senior team.

"I am privileged and fortunate to know so many people who were able to take this awkward kid from Cologne, Germany, the first German to come to North America to help him on his way and help him learn to play hockey in the best league in the world," Krupp said.

Koivu was another inductee, with the list initially revealed in January.

He is considered one of Finland's greatest-ever ice hockey players and claimed three bronze medals and one silver at the Olympic Games.

Koivu is arguably best known for helping Finland win the 1995 IIHF World Championship, where they overcame rivals Sweden 4-1 in the final.

His compatriot Selanne has four Olympic medals to his name having been part of the Finnish teams which finished third in 1998, 2010 and 2014.

He also won silver at Vancouver 2010.

Selanne broke into the NHL in 1992 and scored 76 goals, a record for a rookie, while he remains the top-scoring Finn ever to play in ice hockey's most famous league.

Austria's Kalt represented his nation in every major IIHF event from 1962 through to 1972, before becoming a referee and coach.

He then served as the President of the Austrian Ice Hockey Federation from 1996 to 2016.

Canadian star Sakic helped his country secure gold at the 2002 Games in Salt Lake City, where he was voted as the tournament's most valuable player, and also clinched the world title in 1994.

Hand is viewed as the greatest player in Britain's modern ice hockey history, playing professionally from the age of 14 through to 47.

The Paul Loicq award, which is presented to those who have made outstanding contributions to the IIHF and international ice hockey, was given to Francheterre.

The Frenchman has been seen as pivotal to developing the sport in the nation, overseeing the country’s development and rise to the World Championships top division.