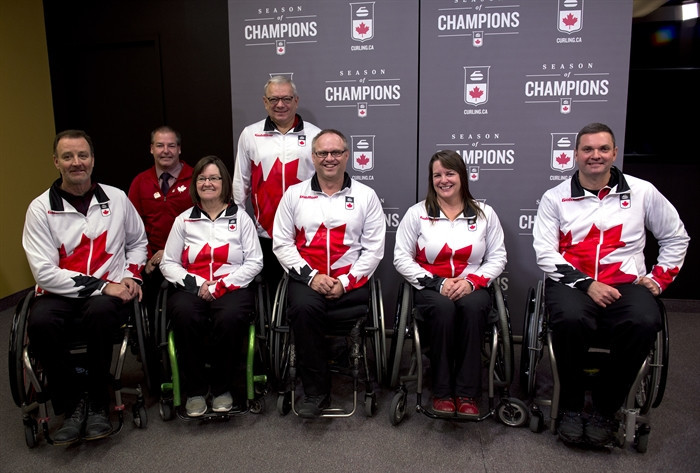 Three Canadian wheelchair curlers who were part of the gold medal-winning team at Sochi 2014 have been nominated to the squad for this year's Winter Paralympic Games in Pyeongchang.

Curling Canada has confirmed five athletes have met the nomination criteria to be part of the team at Pyeongchang 2018, where the country will bid for a fourth straight Paralympic title.

Canada has won every wheelchair curling Paralympic gold medal since the sport was first contested at the 2006 Games in Turin.

Ina Forrest, a two-time gold medallist, will reprise her role of vice-skip, while Dennis Thiessen has been selected to return as second.

They will be joined by Paralympic debutants Marie Wright, who represented Canada at last year's World Championships, and James Anseeuw, who is in line to make his first major international appearance for the nation.

All five players met the qualification standard and were selected by Curling Canada.

The Canadian Paralympic Committee will officially name the team which will head to the Games in Pyeongchang in the near future.

"Canada’s curlers are the best in the world, and our athletes have the gold medals to prove it,” said Kent Hehr, Minister of Sport and Persons with Disabilities.

“On behalf of the Government of Canada, congratulations to the athletes who have been nominated to represent Canada in wheelchair curling at the Pyeongchang 2018 Winter Paralympic Games.

"Our country has experienced incredible success in curling at previous Paralympic Games and I’m confident these athletes will make Canadians proud while inspiring our younger generation to participate in sport.

“The qualifying standards to make the Canadian Paralympic Curling Team are extremely rigourous as they should be, because this country has high expectations of its curlers, and I know this team will work extremely hard between now and the Winter Paralympics in order to meet those expectations.”

Curling at the Pyeongchang 2018 Paralympics is due to be held at the Gangneung Curling Centre, which staged the 2017 World Championship.