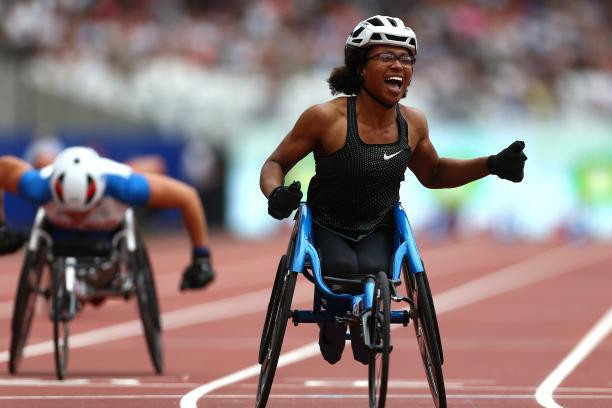 A week after the outstandingly successful European Athletics Championships came to a close in Berlin, the German capital prepares to welcome another wave of top athletes for the World Para Athletics European Championships, due to underway tomorrow and run until next Sunday August 26.

These Championships will seek to take advantage of the way Berlin 2018 part one hugely raised the profile of track and field within the continent as part of the wider European Championships being jointly staged with Glasgow.

The essence of the earlier Championships was great competition - and the Para-athletics version looks more than ready to deliver its own compelling dramas at the Friedrich Ludwig Jahnsportpark.

Among those set to compete are Britain’s 17-year-old wheelchair athlete Kare Adenegan in the T34 100 metres.

She set a world record of 16.80sec at the Anniversary Games event at the Olympic Stadium in London last month.

After finishing three-quarters-of-a-second behind Adenegan, and seeing her world record broken, Hannah Cockcroft told BBC Sport, "I've finally got competition and this is what I have been looking forward to for the last few years".

Harry commented that this was “a timely and very clear reminder from the multiple World and Paralympic champion that it's not necessarily going to be all about Adenegan from here on in.”

Among others going for gold in Berlin will be Britain’s 42-year-old Paralympic and world champion Richard Whitehead, and one of his great rivals, Germany's Heinrich Popow, who – like former world and Olympic discus champion Robert Harting – will make his final international appearance in Berlin in front of a home crowd.

There will be a fierce home battle in prospect in the  men’s 100m T64, where Johannes Floors and Felix Streng go head-to-head.

Both athletes are in superb form, and with Britain’s double Paralympic champion Jonnie Peacock taking time out from the sport the opportunity is there for another memorable home win.

As a double below-knee amputee, Floors competes in the T62 class, while Streng, who was born without his right foot and lower shin, is a T64 athlete.

Streng may be quicker out of the blocks, but Floors proved at last year's World Championships in London that he is more than capable of a strong finish.

The 23-year-old won world silver behind Peacock in London last year, as well as winning gold medals in the 200m, 400m and relay.

This season he has continued to prove that he means business, clocking 10.79 in June - as well as setting world leads in the longer sprints.

Streng was forced to miss the World Championships through injury.

This year the 23-year-old is back, more motivated than ever after missing out on a major championship and now consistently running sub-11 seconds.

Streng is yet to win a major 100m title - he has two European silver medals and Paralympic bronze to his name – but he believes it’s only a matter of time before he becomes the fastest leg amputee in the world.

It is a position currently held by Richard Browne of the United States, who clocked 10.61 at the 2015 World Championships in Doha.

"I think I’m one of the youngest in the field and I think I just have to believe in myself and then it will come," explained Streng after he clocked a 2018 world lead 10.67 in Leverkusen in June.

Reid beat her French rival by a single centimetre in the T44 long jump at the Anniversary Games in the Olympic Stadium, where he had won her first world title the previous summer.

Reid’s winning distance of 5.55 metres indicated a return to form after what she admitted had been a "frustrating" season where results had not backed up what she felt capable of in training.

Buoyed by her performance at the Olympic Park, the 33-year-old heads to Berlin looking to regain the title she won in 2014.

The event in London also provided a season’s best for Le Fur, who, like her British rival, now competes in the recently adopted T64 class for single below-knee amputees.

The French star, who took Rio 2016 gold ahead of Reid with a world record leap of 5.83m, continues her impressive comeback to the sport following the loss of her unborn baby earlier this year.

"Hands down she is the star of today, I’m in awe of her," said Reid after the Anniversary Games.