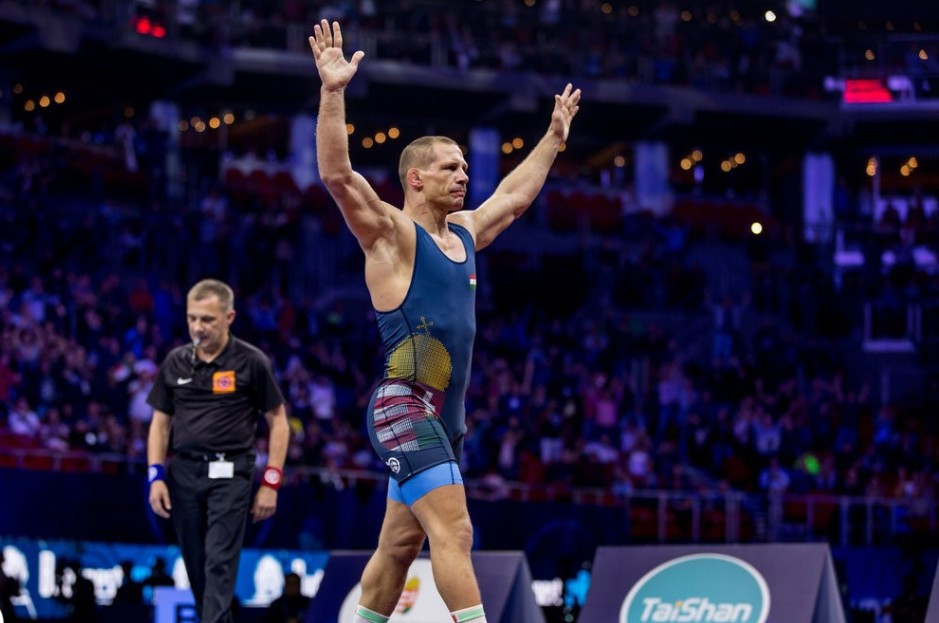 Bacsi's Greco-Roman gold came in the last match of the night at 82 kilograms and followed an earlier final at 72kg in which another Hungarian, Balint Korpasi, lost.

The tension and anticipation at the Papp László SportArena was therefore very high and the noise as Bacsi entered the arena was the loudest yet heard at the event.

The 35-year-old, who already had a world title from 2014, initially went behind in the final 3-0, but a penalty against his opponent Emrah Kus from Turkey, followed by a gut wrench and a push out, saw Bacsi seal his second world title at 4-1.

The bronze medals at 82kg were won by Viktar Sasunouski from Belarus and Armenia's Maksim Manukyan.

At 72kg it was a German who took the world title, which was fitting with his compatriot Bach in the crowd.

In a close final a push-out in the second half sealed a 2-1 win for the German, who celebrated by grabbing a flag and putting on some sunglasses.

The bronzes at 72kg were won by Rasul Chunayev from Azerbaijan and Aik Mnatsakanian from Bulgaria.

Perhaps the most impressive win of the night came in the 55kg Greco-Roman category, where Azerbaijan's Eldaniz Azizli claimed the gold inside a minute.

The two-time junior world champion sealed his place atop the podium by beating Zholaman Sharshenbekov from Kyrgyzstan 10-0.

At 55kg the bronzes were won by Turkey's Ekrem Ozturk and Georgia's Nugzari Tsurtsumia.

In the fourth medal category tonight, at 63kg, the gold was taken by Stepan Maryanyan from Russia, who claimed the country's fifth gold of the competition.

He beat Uzbekistan's Elmurat Tasmuradov 6-3 before having a short prayer in the middle of the mat in celebration.

At 63kg the bronze medals were won by Rahman Bilici, from Turkey, and Ukraine's Lenur Temirov.

Tomorrow will be the penultimate day of the Championships and will feature more medal action across three Greco-Roman categories at 60kg, 67kg and 87kg.