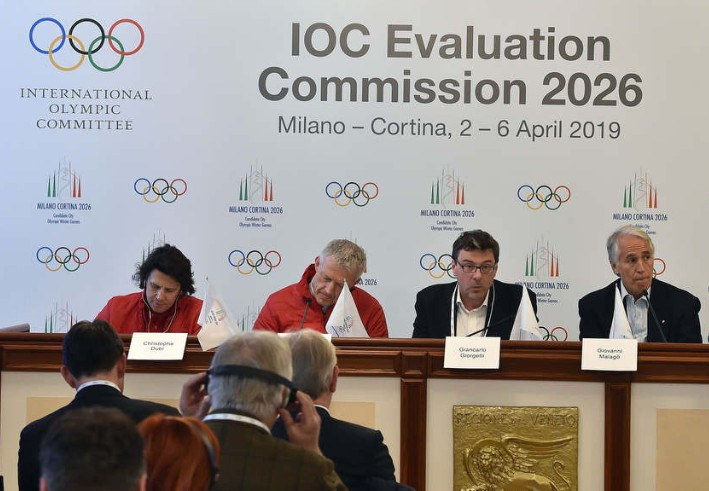 The slogan "Dreaming together" was unveiled here today as Milan and Cortina d'Ampezzo's bid for the 2026 Winter Olympic and Paralympic Games prepared for a key milestone in its campaign.

The strap line, accompanied by the promise the joint Milan Cortina 2026 bid would provide "sustainability","future" and "legacy", was launched as the International Olympic Committee (IOC) Evaluation Commission – led by Romania's Octavian Morariu – arrived in Italy to begin its five-day inspection tour.

Momentum seems to be building behind the Milan Cortina 2026 bid after it was also announced today that Italy's Prime Minister Giuseppe Conte would sign the financial guarantees required by the IOC, including for the €415 million (£355 million/$465 million) security budget.

It has put Italian National Olympic Committee President Giovanni Malagò in confident mood on the eve of the IOC Evaluation Commission visit, which officially begins in Cortina, host of the 1956 Winter Olympic Games, tomorrow.

"We go with optimistic spirit, always, as it is my nature and as I have always emphasised," said Malagò, an IOC member himself.

"I think we did our homework well: I don't have to be the judge, they will have to be.

"It is clear that it is an important visit, but the team is ready."

The first visit in Cortina tomorrow is scheduled to be at the Tofane, a site identified for the women's Alpine skiing competitions and for the team event.

The IOC Evaluation Commission is then due to visit the sliding centre, which was built for the 1956 Olympics but has been closed for more than 10 years and will need considerable investment to bring it up to standard if Milan Cortina is awarded the Games.

Also due for inspection is the curling facility and the area destined to host one of the three Athletes' Olympics.

The day will continue with the transfer to Anterselva, a venue which could host the biathlon competitions, and then to Baselga di Pinè, in the Val di Fiemme, to Tesero and to Predazzo, for the inspection of the venues proposed to accommodate speed skating, ski jumping and the Nordic combined.

The IOC Evaluation Commission is due to produce a report on both Milan Cortina 2026 and its only rival, Stockholm Åre 2026, before the end of next month.

The final vote is scheduled to take place in Lausanne at the IOC Session on June 24.