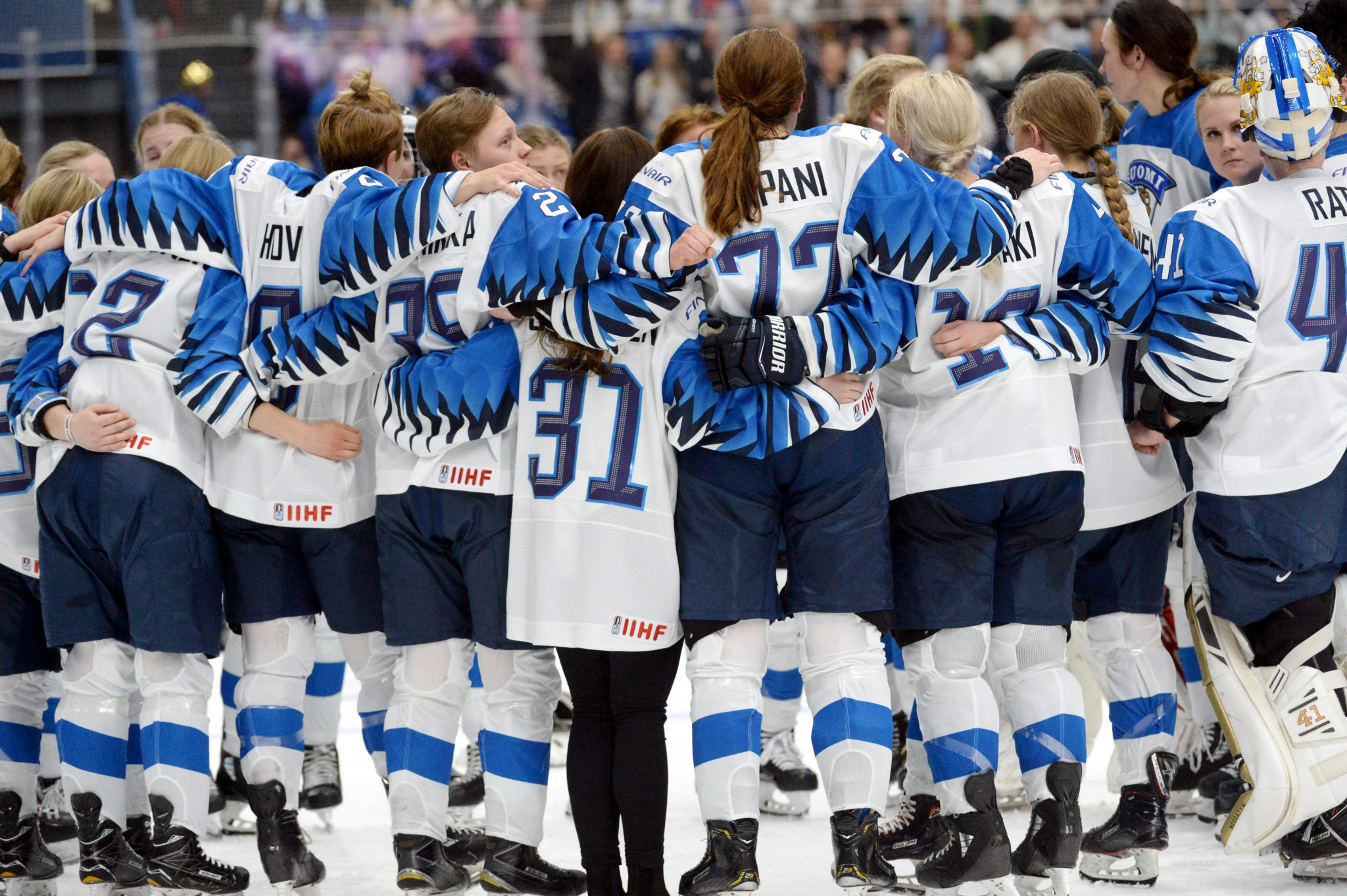 Olympic and defending champions United States went on to secure a fifth consecutive world title by winning the shoot-out 2-1.

There was huge drama as the home side -and the vast majority of the 6,053 spectators crammed into Espoo Metro Areena - believed they had done the impossible and won the title in their first global final with a golden goal from Petra Nieminen with 8min 27sec of overtime remaining.

The effort sparked crazy celebrations and a mass huddle at the side of the ice.

Tournament most valuable player and all-star defender Jenni Hiirikoski had made an end-to-end rush and her initial shot was stopped by US goalie Alex Rigsby.

As Rigsby slid out of the net and Hiirikoski made contact, with America's Kacey Bellamy right on top of her, Nieminen banged the rebound into the gaping cage.

But, to howls of derision from the packed home crowd, officials ruled the effort out for goalie interference after a lengthy video review.

The situation was made more confusing when a tripping penalty was applied  to Rigsby, but the goal was still disallowed.

The IIHF has released following statement explaining the reasoning behind the disallowed goal in overtime during the #WomensWorlds gold medal game following a video review: https://t.co/YDsHnhYkyA

In the aftermath, Hayley Wickenheiser, the International Olympic Committee Athletes' Commission member, who retired in 2017 after helping Canada earn four Olympic titles, tweeted: "That. Was. A. Goal. #suomi".

"All goals that were scored during the 2019 IIHF Ice Hockey Women’s World Championship were reviewed by the IIHF Video Goal Judge Operations," the IIHF statement read.

"The overtime goal scored by Team Finland against Team USA was reviewed and disallowed by the Video Goal Judge Operations, due to non-incidental goaltender interference.

"Two IIHF Playing Rules were considered in this instance:

"According to IIHF Playing Rule 186 v. Goaltender and Goal/Goal Crease Disallowed: An attacking skater who makes contact other than incidental with a goaltender who is out of his goal crease during game action will be assessed a minor penalty for interference. If a goal is scored at this time, it will not count.

"According to IIHF Playing Rule 183 ii. Protection of a Goaltender: Incidental contact is allowed when the goaltender is in the act of playing the puck outside his goal crease, provided the attacking skater makes a reasonable effort to minimize or avoid such contact.

"Taking these two rules into consideration, the IIHF Video Goal Judge Operations determined that the goal must be disallowed.

"During the play, the on-ice official called a penalty for Tripping on the USA goaltender.

"Penalties that are assessed on-ice are not reviewable by the Video Goal Judge.

"The VGJ cannot assess or cancel a penalty.

"The decision to uphold the penalty was made by the on-ice official."