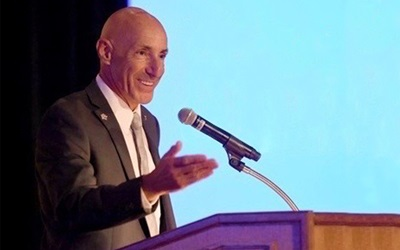 USA Triathlon President Barry Siff has resigned from his role to take up the post of chief executive at USA Handball.

Siff had served as a board member at USA Triathlon since 2012 before becoming President of the organisation two years later.

He has been credited for identifying and advancing the organisational key priorities, along with the development of their strategic plan and leading the hiring process of USA Triathlon chief executive Rocky Harris in 2017.

Boosting female representation on the USA Triathlon Board and pushing the organisation to better serve all race directors were also hailed as key achievements.

Siff serves on the Executive Boards of the International Triathlon Union (ITU) and the American Triathlon Confederation (CAMTRI).

Both positions are unchanged, despite his departure from USA Triathlon.

Under Siff's leadership, America celebrated its gold medallist in triathlon since it made its Olympic debut at Sydney 2000 when Gwen Jorgensen won the women's race at Rio 2016.

"Barry Siff has made an indelible impact, both in the U.S. and internationally, during a span of nearly 30 years in multisport," said Harris.

"USA Triathlon has been incredibly fortunate to have such a passionate and dedicated leader at the helm of its Board of Directors, as well as his innumerable roles over the years.

"We are grateful for his service and passion, and we know that he will remain an integral part of the triathlon landscape for the foreseeable future."

Siff believes he has left the organisation with a "world-class" team but will now turn his attentions to growing handball in the United States.

"I have been a triathlete since 1986, and it has been an incredible honour and privilege to help lead USA Triathlon as its Board of Directors President for the past five years," he said.

"The current team at USA Triathlon is truly world-class, and I leave knowing that we have laid an incredibly strong foundation to achieve its mission of growing, inspiring and supporting the triathlon community.

"I first saw team handball live at the 1996 Atlanta Olympic Games, and my love and respect for the sport has stayed with me over the years.

"I believe it is a sport made for American athletes - fast, physical, high scoring, and requiring great athleticism - truly a formula for America’s next great sport.

"As recently as the Olympic Games Rio 2016, I shared my passion and hopes for the sport with both Thomas Bach, IOC (International Olympic Committee) President, and Hassan Moustafa, International Handball Federation President, and I am thrilled to now have the opportunity to lead this organisation."

Siff succeeds Michael Cavanaugh, who has transitioned to operations director.

He will work with Siff in aligning policies and procedures with United States Olympic Committee programmes, as well as managing several important domestic and international competitions.

America last featured in handball competition at Atlanta 1996, where they were granted a place in the tournament as the host nation.

The women’s national team last qualified for the Olympic Games at Barcelona 1992, while the men’s last achieved the feat at Seoul 1988.

The men’s team have failed to qualify for the past nine World Championships, while the women’s squad have missed out on the last 11 editions.