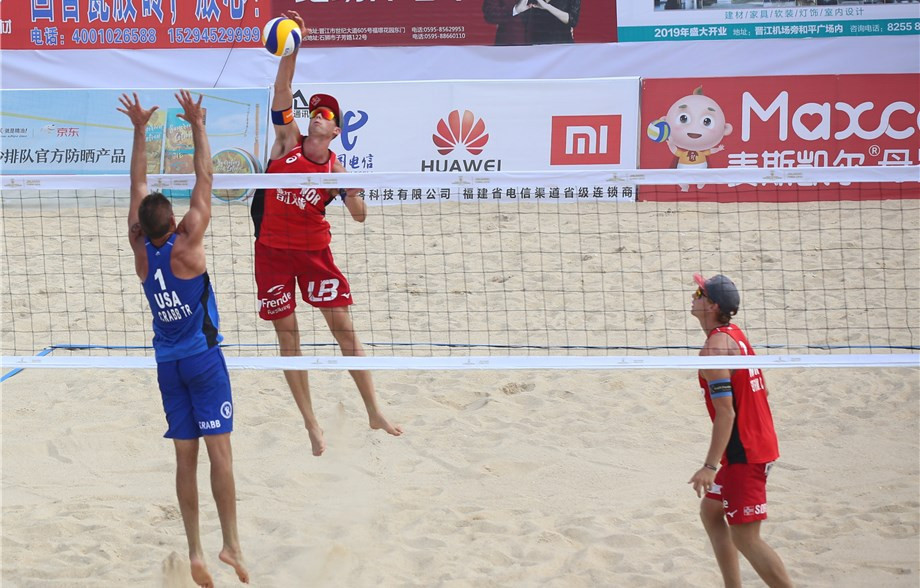 Norway's Anders Mol and Christian Sørum are one victory from two consecutive titles on the International Volleyball Federation Beach World Tour after reaching the final of the Jinjiang Open today.

The rankings leaders and reigning World Tour Finals champions won the Itapema Open in Brazil earlier this month and have shone again at the latest four-star event in China.

It was a bumper day in the men's draw with pairs having to negotiate the round of 16, quarter-finals and semi-finals.

Mol and Sørum, who won their pool yesterday, defeated American pairs in all three rounds to book a final against Brazil's Evandro Gonçalves Oliveira Júnior and Bruno Oscar Schmidt.

In the semi-finals the Norwegians ousted defending champion Trevor Crabb and his new partner Tri Bourne by a 21-15, 21-15 scoreline.

"We're super happy to win this semi-final, we were up against a really strong team and we knew it was going to be a battle," said Sørum after their work for the day was done.

"The game was up and down, they were in front and then we were in front, it was interesting, but I'm really glad we made it in the end."

Evandro and Schmidt have already had a taste of Norwegian opponents after beating Anders' brother Hendrik Nikolai Mol and partner Mathias Berntsen, the siblings' cousin, 21-14, 21-14 in the last 16.

They then ousted Russia's Viacheslav Krasilnikov and Oleg Stoyanovskiy 21-18, 21-16 in the last eight before a 26-24, 21-15 win over compatriots Geroge Souto Maior Wanderley and Andre Loyola Stein in the semi-finals.

"Everybody getting into the final is probably going to meet these Norwegians, so they are doing well, they are healthy, they are young, they are so powerful," said Schmidt.

"I couldn't expect more than such a high level of beach volleyball for tomorrow."

In the women's tournament, two rounds were played as the semi-final line-up was fixed.

Australia's Taliqua Clancy and Mariafe Artacho reached the last four in China for the third time in a row by knocking out Brazil's Talita Da Rocha Antunes and Taiana Lima 20-22, 21-19, 15-10 in the quarter-finals.

They will now play another Brazilian duo in Ana Patricia Silva Ramos and Rebecca Cavalcanti Barbosa Silva, who saw off Germany's Karla Borger and Julia Sude 21-13, 15-21, 15-11 to book their spot.

Brazil will be represented in both semi-finals after Agatha Bednarczuk and Eduarda Santos Lisboa advanced by beating team-mates Maria Antonelli and Carolina Solberg Salgado 21-18, 21-18.

Their reward was a meeting with Brooke Sweat and Kerri Walsh Jennings, who won an all-American contest with Kelly Claes and Sarah Sponcil, 21-13, 23-21.

Sweat and Walsh Jennings, a triple Olympic gold medallist, have yet to drop a set in Jinjiang.

Both tournaments will be played to a conclusion tomorrow.