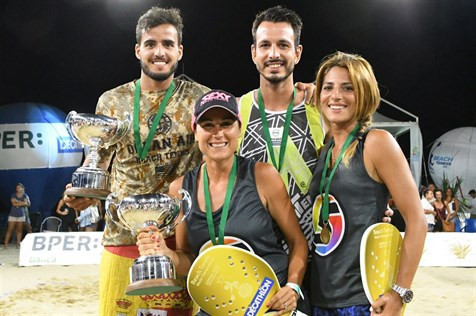 The Championships take place in the west coast town, just south of Rome, for the first time after being held in another Italian locale, Cervia, last year.

The doubles contests - the primary beach tennis events - are due to begin on Wednesday (June 12) following qualifying due to start tomorrow as participants compete for $5,000 (€4,500/£4,000) prize money in both the men's and women's events, while the singles start on the Friday (June 14).

With all contests having 32 players or pairs in their main draw, the Championships take place over 16 outdoor 16 metres x 8m sand courts, with the singles on narrower 4.5m courts.

The men's and women's doubles are played to rules similar to traditional tennis - best of three tie-break sets - while mixed doubles are decided over two tie break sets, then a 10-point match as a decider if needed.

All games are no-advantage after deuce, plus there is no second service and no service let.

In progress, the game itself resembles a mix of badminton and volleyball - the ball cannot bounce, and has to be kept above the 1.7m-high net using paddle bats and be returned over the net first time.

Since the Beach Tennis World Championships were first held in Rome in 2009 this has been an Italian-dominated event, and it looks as though it could be a similar case this year in an event due to conclude on Sunday (June 16).

Last year's doubles world champions in the men's were Antomi Ramos Viera from Spain and Mikael Alessi of Italy, and the Italian pair of Federica Bacchetta and Giulia Gasparri in the women's – and in both cases, half of the dream team has returned.

Ramos Viera has withdrawn ahead of this year's tournament, so Alessi will now partner with fellow countryman Luca Carli.

Ranked number four entrants via the ITF ranking, the top entrants are singles world number one Nikita Burmakin of Russia with another Italian, Tommasso Giovannini.

In the women's doubles, Bacchetta is absent for 2019, so Gasparri partners with another Italian, Sofia Cimatti, as top entrants with the best ITF combined ranking.

Their biggest rivals look set to be another another Italian pair - ITF singles number one Flaminia Daina, with Nicole Nobile.