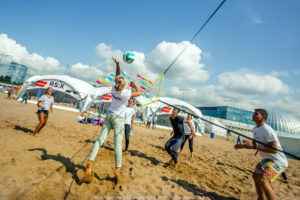 Low winds in Saint Peterburg meant no racing was possible on day three of the RS:X Windsurfing Youth World Championships.

With winds only between two and three knots, and constantly fluctuating in direction, the Race Committee decided it was impossible to host fair racing and abandoned the day's schedule.

The 104 competitors from 19 countries were instead forced to find other ways of entertaining themselves, with impromptu games of beach volleyball and football breaking out on Neva Bay.

The lack of racing means Eyal Yohay Zror of Israel remains in the lead in the men's event with 10 points, ahead of compatriot Daniel Basik Tashtash, who has 13 points overall.

Among the chasing pack are Italy's Edoardo Tanas, France's Mathis Ghio, another Israeli in Riuven Hillel and Youth Olympic champion Alexandros Kalpogiannakis of Greece, all on 17 points.

France's Manon Pianazza tops the women's standings on 14 points, followed by Israel’s Naama Greenberg and Linoy Geva on 17, while Russia’s local sailor Yana Reznikova has 19 after she won the first race of the day.

Another three races are scheduled to be held tomorrow, although more may be added to make up for the absence of racing today.