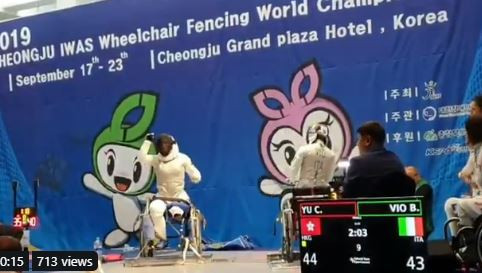 China’s domination of the Wheelchair Fencing World Championships in South Korea was halted today as they lost the men’s sabre team final to Ukraine and were beaten by eventual champions Hungary in the women’s foil team event.

The Ukraine fencers won 45-39 after completing an arduous course of competition which started with a 45-35 win over Britain at the Grand Plaza Cheongju Hotel.

Next up was a quarter-final match against Poland, which they squeezed through 45-42, followed by an even more demanding semi-final against Hungary, which they won 45-43.

Hungary win against Hong Kong by just one touch - what an advert for wheelchair fencing that was!#Cheongju2019 #Drama #Foil @Paralympics | @FIE_fencing pic.twitter.com/UpJl7CYZUs

China’s route to the final was less taxing, although they had a tough semi-final against Russia which they won 45-41.

In the earlier women’s foil team competition, China lost their first match, a quarter-final against Hungary, 45-40.

The latter nation went on to defeat Russia 45-37 in the semi-final before completing a tense 45-44 victory over Hong Kong in the final.

Hong Kong had edged past Ukraine 45-43 in their quarter-final and then caused a huge upset by beating defending champions Italy by the same score in the semi-finals.

China’s gold medal count remains at 10 as the event moves into its final day tomorrow, when the épée male and sabre female team events will take place.

This International Wheelchair and Amputee Sports Federation competition is a key qualifying event for the Tokyo 2020 Paralympic Games.