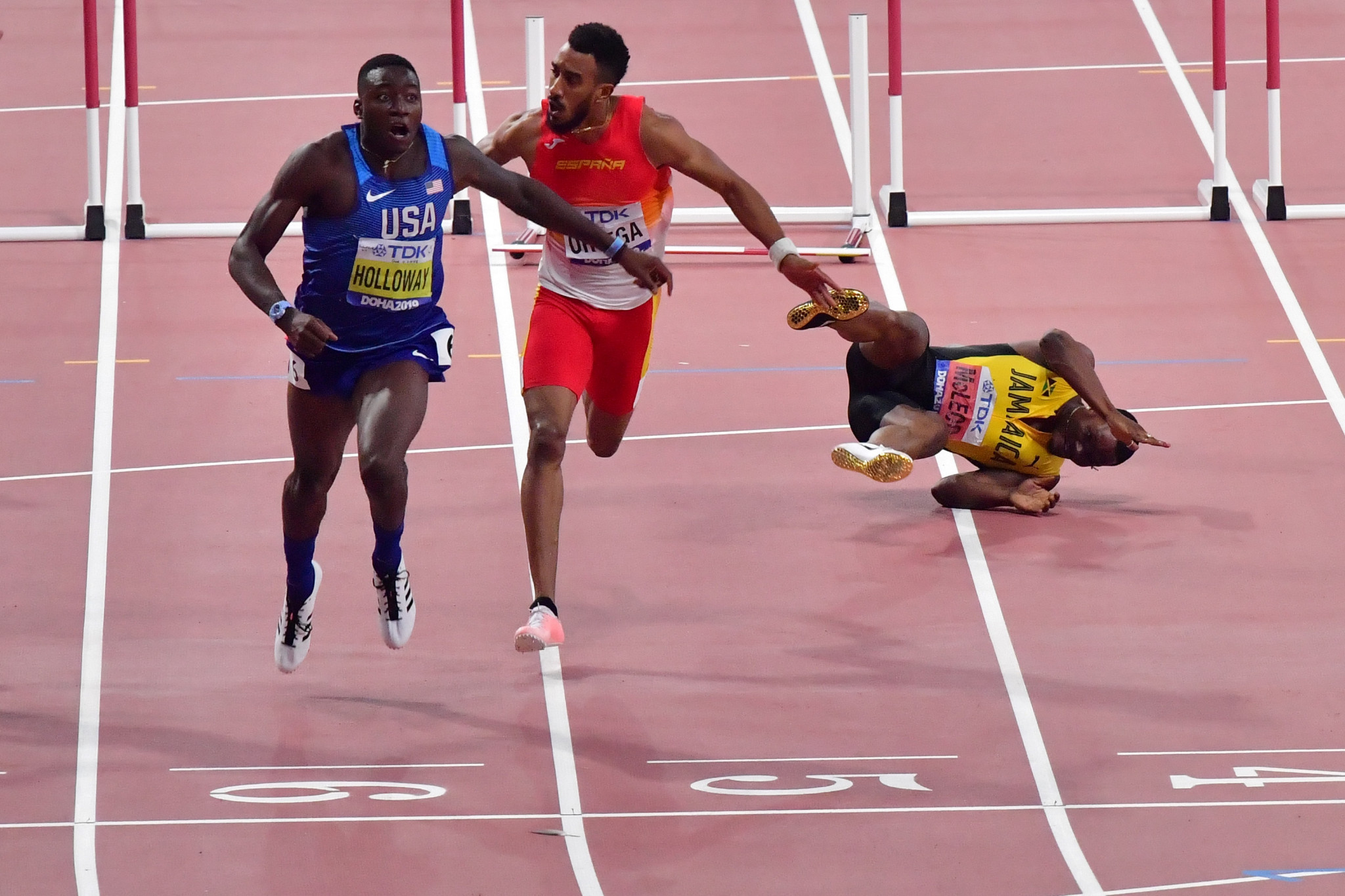 The 21-year-old United States runner the won gold medal in a time of 13.10sec to mark his first season as a professional.

He led from the gun, putting remorseless pressure on the defending and Olympic champion, Omar McLeod of Jamaica, to the point where the latter clattered to the deck after hitting the three final hurdles with increasing force.

As he fell, McLeod unwittingly forced Spain’s IAAF Diamond League champion Orlando Ortega out of his lane, thus undermining the latter’s chances of a medal.

Spain lodged an appeal, seeking a re-run, but it was turned down.

Silver went to Authorised Neutral Athlete Sergey Shubenkov, the 2015 champion and 2017 silver medallist, who chased the new arrival home from the outside lane, adding a silver to his collection in 13.15.

"I am speechless," said Holloway, who is in fact one of the most wry and articulate athletes on the circuit.

2It’s my first major Championships and a lot of people were counting me out because I’ve been off my game in the last month or so.

"But when you have motivation you never lose."

Earlier in the evening, the 23-year-old Asher-Smith had lived up to her billing as overwhelming favourite in the women’s 200m final by winning overwhelmingly, in a British record of 21.88.

After the injuries that had befallen potential rivals such as Jamaica’s Rio 2016 gold medallist Elaine Thompson, 2013 and 2015 world champion Dafne Schippers of The Netherlands and 2017 world silver medallist Marie-Josee Ta Lee of the Ivory Coast, Asher-Smith had less of a task in her final that there might have been.

All she could do was to make as convincing a job as possible of adding gold to the silver she won in the 100m behind Jamaica’s Shelly-Ann Fraser-Pryce on Sunday (September 29) - and this she did as she finished with five metres to spare, trimming a hundredth of a second off the time in which she secured the European title in Berlin last summer.

Brittany Brown of the US took silver in a personal best of 22.22, with Switzerland’s Mujinga Kambundji adding world to her European bronze in 22.51.

In the first final of the night, Poland’s Pawel Fajdek became the first man to win four world titles in the hammer with a best effort of 89.50 metres.

France’s Quentin Bigot took silver with 78.19m ahead of Hungary’s Bence Halász, who had a best of 78.18m.

Wojciech Nowicki, who beat his fellow Pole to the European title last summer, missed the podium by one place with a best of 77.69m.

But Nowicki's fortunes took an upturn as he was eventually awarded a bronze along with Halász, following a Polish team appeal challenging the validity of the Hungarian's first, and farthest, effort, and saying he had touched the ground outside the circle during the throw.

"The appeal was upheld and the Jury of Appeal directs that Wojciech Nowicki also be awarded a bronze medal.

"The irregularities cited in the decision concern a disputed first throw by the Hungarian athlete.

"The jury believes the decision on the first throw influenced the Hungarian athlete's approach to his remaining attempts.

"Therefore the jury has decided in fairness to both athletes, that two bronze medals shall be awarded."

Katerina Johnson-Thompson of Britain carries a lead of 96 points over Belgium’s defending champion Nafissatou Thiam into tomorrow’s concluding day of the heptathlon, her first day total of 4,138 points being the fourth-best ever achieved.

Thiam, also the European and Olympic champion is in silver-medal position on 4,042 points, with three US heptathletes bunched behind - Kendell Williams on 3855, Erica Bougard on 3853 and Annie Kunz on 3840.

Britain’s 2018 world indoor champion produced personal bests of 13.09 in the 100m hurdles and 13.86m in the shot put and equalled the high jump best achieved at the World Championships, 1.95m.

Thiam also cleared 1.95m, and drew ahead following the fourth event, the shot put, where she managed 15.22m.

Having only managed 12.33m and 12.38m with her first two efforts, Johnson-Thompson, who took European silver behind Thiam after a mighty contest in Berlin last summer, was at risk of losing touch.

But she was soon cupping her face in her hands after producing a significant improvement on her previous best of 13.15m.

The 100m hurdles heats had also seen former world junior 100m hurdles champion Kendell Williams of the United States lower her personal best from 12.82 to 12.58, the fastest time ever run at the World Championships in the heptathlon.

It would have won her the world 100m hurdles title two years ago in London.

Despite producing three personal bests in the opening five events in the decathlon, defending champion Kevin Mayer of France stands third overnight on 4,483 points, and still well placed to earn another gold,  behind the Canadians Damian Warner, who has 4,513, and Pierce Lepage, who has 4,486.

Warner and Lepage were fastest 100m finishers as the decathlon got underway, clocking 10.35 and 10.36 respectively, but Mayer wasn’t far behind with a personal best of 10.50.

The Canadian pair carried on at the same level in the long jump, where Lepage finished top with 7.79m and Warner second on 7.67m, with authorised neutral athlete Ilya Shkurenyov third best on 7.61m.

But again Mayer kept in touch with a season’s best of 7.56m on his final attempt.

Again Mayer produced a personal best in the third event of the decathlon, launching the shot out to 16.82m, with Grenada’s Lindon Victor second in the list on 16.24.