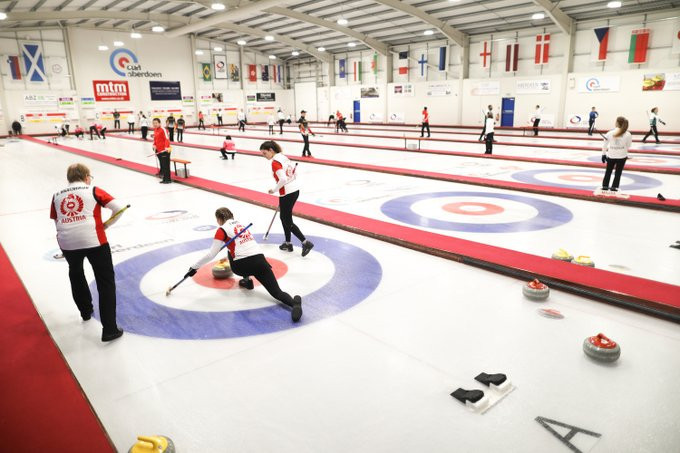 Slovakia claimed one the six remaining play-off spots on offer today as round-robin action concluded at the World Mixed Curling Championship in Aberdeen.

This came despite the country's team not being on the ice for the morning session at Curl Aberdeen, with defending champions Canada's 7-2 win over Estonia securing their passage from Group A.

The Slovakians later defeated Estonia 7-1 to finish in third place on five wins and two losses.

That was the same record as runners-up Germany, who lost 7-6 to Hong Kong in their last match.

Canada topped Group A with seven wins out of seven having followed up their victory over Estonia by overcoming Kosovo 17-3.

In Group B, Norway and Poland joined Denmark in qualifying after winning their last matches.

Czech Republic dropped out of the top three after losing 6-1 to Denmark, who finished runners-up to Norway in the final standings.

Today's one other match in Group B saw New Zealand overcome Croatia 7-6.

Spain, the United States and Hungary had already secured qualification from Group C and they were joined by Sweden, who beat Kazakhstan 7-5 in the game that decided the best fourth-place finisher.

First place in the section went to Spain, who made it seven wins out of seven by defeating Brazil 7-2 and Hungary 7-5.

Teams marked as "Q" have qualified for the play-off stage.#wmxcc2019

The US lost 7-5 to Australia in their final game and were the runners-up ahead of Hungary.

There was also an 11-3 victory for Latvia over Brazil.

The two other play-off spots allocated today went to Turkey in Group D and South Korea in Group E.

Turkey beat Italy 8-5 in a double extra-end game to take the last berth, while South Korea ensured their progression by defeating England 7-2 earlier in the day.

Scotland overcame Ireland 7-3 to complete their round-robin undefeated and clinch top spot in Group D ahead of their opponents.

There were also Group D wins for Japan, 11-5 against Slovenia, and Chinese Taipei, 5-2 against Luxembourg.

Russia made it seven wins out of seven in Group E by beating France 9-2.

Switzerland, 6-3 victors at the expense of Belgium today, were narrowly behind with one loss.

Finland had to settle for fourth place, despite defeating Austria 8-0 in their last outing.

As the 16th-seeded team, Sweden are due to play top seeds Canada in tomorrow's opening playoff round.

There are also games between Denmark and Ireland, Slovakia and Norway, Spain and Hungary, the US and Switzerland, Germany and Poland, Russia and South Korea, and Scotland and Turkey.

The medal matches are scheduled to bring the tournament to a close on Saturday (October 19).