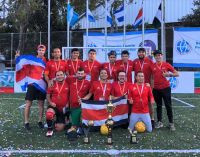 Costa Rica retained their Blind Football Central American Championship title with a thumping 5-0 win over hosts Guatemala in the final.

Ángel Flores was the star of the show for the defending champions as he scored a hat-trick, while Daniel Contreras and Michael Mora chipped in with a goal apiece in a one-sided final in Guatemala City.

Costa Rica were the dominant force at the tournament as they found the net 27 times during their four matches.

They topped the group with a 100 per cent record before their comfortable win over Guatemala in the final, a repeat of the 2017 showpiece.

Guatemala were second in the group and were forced to settle for the silver medal for the second consecutive edition of the Championship.

El Salvador finished third after beating Nicaragua in the play-off.

El Salvador beat their opponents 2-1 in a shoot-out following a 0-0 draw.