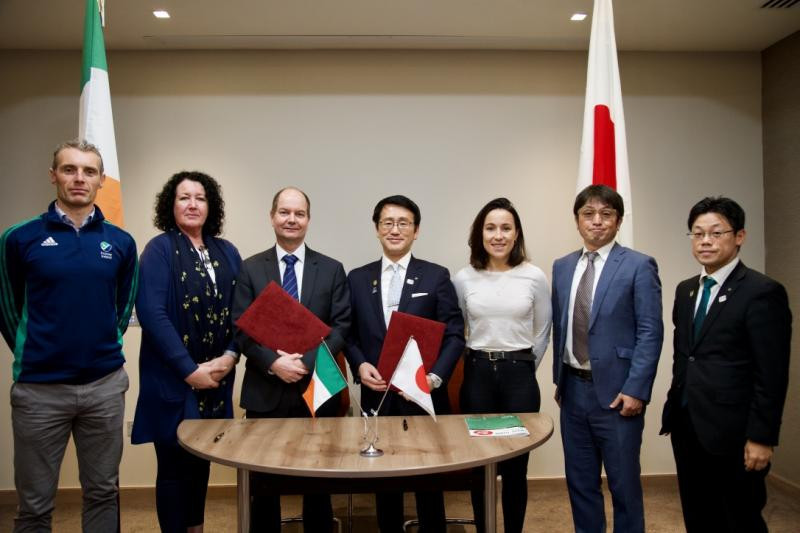 Hockey Ireland will hold a pre-Tokyo 2020 training camp in Iwate after signing a memorandum of understanding with the Japanese city.

The country's women qualified for their first Olympic Games in November and will now base themselves two hours to the north of Tokyo.

They will arrive in Iwate two weeks before the Tokyo 2020 Opening Ceremony on July 24 in a bid to best acclimatise to Japanese conditions.

A new hockey pitch has been installed in Iwate which will be used during the training camp.

"The Hockey Ireland holding camp partnership with Iwate is a very welcome addition to the senior women’s programme as the team prepares for Tokyo 2020," said performance director Adam Grainger.

"This holding camp offers a superb location for environmental acclimation and final preparation for the Games themselves, while also offering an opportunity to further develop the longstanding hockey relationship between Ireland and Japan."

Ireland defeated Canada on penalty shots to qualify for Tokyo 2020, after a two-leg play-off.

Both matches had finished 0-0.

The world number eight side made a surprise run to the World Cup final in 2018, where they lost 6-0 to The Netherlands.

This was the first World Cup medal in Ireland's history.

At Tokyo 2020, Ireland have been drawn in Group A with The Netherlands, Germany, reigning Olympic champions Britain, India and South Africa.

The Irish men have not qualified for the Games.

Hockey Ireland signed the memorandum of understanding with officials from Iwate, including Mayor Koji Sasaki.

"This is a very exciting time for us in Hockey Ireland," said chief executive Jerome Pels.

"We are delighted to meet the Iwate delegates and look forward to the team travelling to Japan later this year.

"Mayor Sasaki and his delegation have already made us feel very welcome and it is only February."

Ireland's women were due to hold a training camp in Malaysia next month, but this has been cancelled due to the spread of coronavirus.

They are now looking for an alternative venue for warm-weather training.