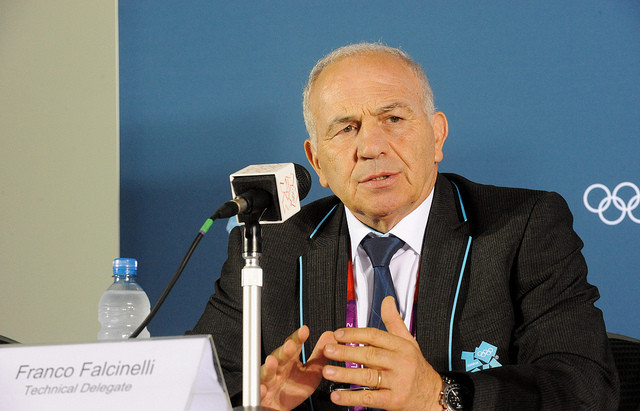 European Boxing Confederation (EUBC) head Franco Falcinelli has called on the body's members to unite behind one candidate for International Boxing Association (AIBA) President as he claimed it was the continent's time to hold the top job in the sport.

Writing in his monthly EUBC newsletter, Falcinelli also warned AIBA's membership "must elect a leader who is not a fruit of underground alliances" when the vote takes place during the remote Extraordinary Congress on December 12.

AIBA last week confirmed a seven-candidate field for the Presidential election, the outcome of which is considered vital if the International Olympic Committee (IOC) is to lift its suspension of the embattled body.

AIBA's Interim President Mohamed Moustahsane, who is also President of the African Boxing Confederation, was a surprise last minute candidate after meeting the November 2 deadline for nominations.

"In this dramatic period, in which the survival of boxing as an Olympic sport is under threat, it is more than ever vitally important to be focused on the principle of unity but not separation, on the principle of the right choice – 'the right man in the right time' – and not on personal ambitions and more or less legitimate electoral promises," Falcinelli, an AIBA vice-president, said.

"We must elect a leader who is not a fruit of underground alliances, but is the expression of a popular will.

"I do trust in the wisdom of intelligent boxing people."

Falcinelli also highlighted how only three Europeans have led AIBA since it was formally established in 1946 as a reason why it was the continent's turn to hold the AIBA Presidency.

AIBA has been headed by an Asian official for the past 35 years "and all of you are well aware of their performances", the Italian added.

"Our continent has always been at the forefront in the organisational activity of major events and in the achievement of technical results at international and Olympic level, and therefore after 42 years, Europe finally has the opportunity to propose a candidate to become AIBA President," Falcinelli wrote.

"Once again, we must support the candidate ethically reliable, with consolidated managerial skills and extensive boxing experience in order to use this unique opportunity.

"We must present only one united candidate to the December election to have the President from our continent that will have the chance to perform successfully for the improvement of AIBA and boxing."

The winner of the Presidential election will become AIBA's first permanent leader since Gafur Rakhimov stood down in March 2019 amid allegations he was involved in heroin trafficking, which he denies.

Moustahsane has been AIBA Interim President for more than 18 months having taken over from Rakhimov.

Falcinelli had held the role following the ousting of Ching-Kuo Wu as AIBA President before resigning in January 2018, which allowed Rakhimov to assume the position on an interim basis.

Rakhimov was elected as the head of the troubled Federation the following November, a crucial factor in the decision from the IOC to suspend AIBA as the Olympic governing body for the sport and strip it of any involvement in the boxing tournament at Tokyo 2020.