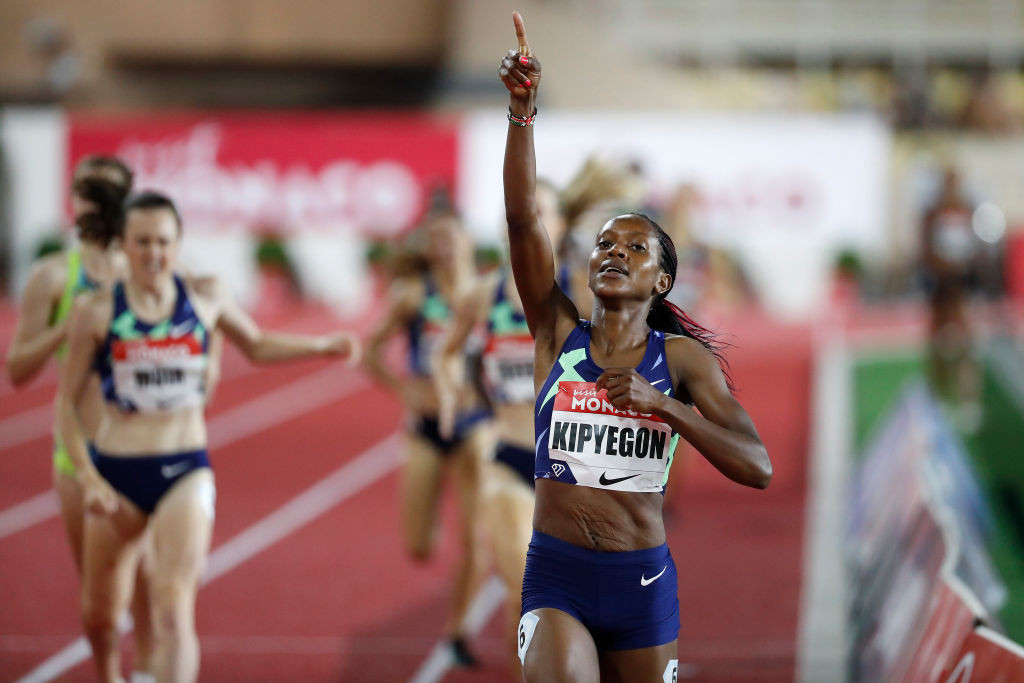 Kenya’s Faith Kipyegon laid down a huge marker for her chances of retaining the Olympic women’s 1500 metres title in Tokyo as she lowered her national record to 3min 51.07sec - moving to fourth on the all-time list - in winning at the Wanda Diamond League meeting in Monaco.

In what proved yet another super-fast night of middle distance running on the Stade Louis II track, Kipyegon earned a telling victory over her perennial rival Sifan Hassan of The Netherlands, who beat her to the world title in 2019, knocking almost three seconds off the national record of 3:53.91 she set in Florence last month.

"I thought I could run faster than that," Kipyegon said.

"I knew Sifan was going for a fast race and my goal was to run a fast race here and I thank God that was.

"I am really looking forward to Tokyo and I know it will be a very hard competition but I hope to go there and defend my title".

Which was your favourite performance?#DiamondLeague

Earlier in the evening Kipyegon’s compatriot Timothy Cheruiyot, the world 1500 metres champion, raised hopes he may have opened the door again to an appearance in the Tokyo 2020 Olympics as he lowered his personal best to 3:28.28, the fastest time run this year, to earn victory over a stellar field including his 20-year-old rival Jakob Ingebrigtsen.

Cheruiyot, not originally named as one of the three chosen 1500m runners for Tokyo after finishing fourth in the Kenyan trials, made it clear afterwards that he now expected to make the trip to the Olympics.

"I missed competition a lot after spending a lot of time in Kenya where I had a few issues like my hamstring injury and after also losing a relative in my family on the day of the Kenyan trials explaining why I missed out on making the team," said Cheruiyot.

"I am therefore happy I am back again after all this.

"Hopefully that will be the deciding performance to make the team for Tokyo.

"My hope now is to be in another Olympics, that is where my mindset is and I will be very happy if I achieve that".

Norway’s European champion had finished marginally behind Cheruiyot on the same track a year earlier, clocking 3:28.68 to eclipse the European record also set on that track by Sir Mo Farah in 2013, with Cheruiyot winning in 3:28.45, just 0.04 off his best.

This time round the gap was greater as Ingebrigtsen - who revealed afterwards that he had been unable to train for the last two weeks because of illness - finished third in 3:29.25 with Spain’s Mohamed Katir setting a national record of 3:28.76 in second place.

Mohamed #Katir with a ?? record of 3:28.76 to pick up 7 huge points, while Jakob #Ingebrigtsen also goes under 3.30.#MonacoDL#DiamondLeague

Once again the Monaco atmosphere and track produced super-fast 1500 metres running - Ingebrigtsen was the only one of the top 12 finishers not to set a personal best.

Australia’s Stewart McSweyn, who set an Oceania record of 3:48.37 in winning Oslo’s Svein Arne Hansen mile on July 1, established another area record as he finished fourth in 3:29.51.

Charles Simotwo of Kenya was fifth in 3:30.30, one place in front of the 2019 European indoor champion Marcin Lewandowski, who set a Polish record of 3:30.42.

"I am very happy with the way the race turned but at the same time it wasn't as good as I have not been able to train at all for the last two weeks due to a bacterial infection and a sore throat, which is why I didn't race in Oslo," Ingebrigtsen said.

"So I did not know what to expect, but at the same time I am able to run fast the whole race.

"So as long as I am able to train well in the next couple of weeks, I know I will therefore be able to compete well in Tokyo".

There was more super-fast middle distance action in the men’s 800 metres, where Nijel Amos of Botswana won in 1:42.91, the fastest time in the world this year, with Kenya’s Emmanuel Korir second in 1:43.04.

There was another shake-up at the top of women’s sprinting in the run-up to the Olympics as Rio 2016 400 metres champion Shaunae Miller-Uibo won the 200m in 22.23 ahead of Marie-Josee Ta Lou of the Ivory Coast, who clocked 22.25, and Jamaica’s 34-year-old double Olympic 100m champion Shelly-Ann Fraser-Pryce, who was third in 22.48.

Ronnie Baker of the United States won the men’s 100m in 9.91 from South Africa’s Commonwealth champion Akani Simbine, who recorded 9.98.

The many observers critical of the final-three format in horizontal field events had further food for fury as Venezuela’s double world champion and world indoor record holder Yulimar Rojas, the only woman to clear 15 metres this season, did so again with a second round mark of 15.12m but then finished second after failing to record a legal mark in the "jump-off".

Victory went to Jamaica’s Shanieka Ricketts, who jumped 14.29m in the final round and had a best of 14.75m on the night.

Rojas, however, who has jumped 15.43m this season, just seven centimetres shy of Inessa Kravets’ 1995 world record, was philosophical after the event.

"I am happy and at the same time a bit disappointed with the last two fouls I did today that were very big jumps, but that is the way competition is.

"I thought it was a big jump and that I probably had achieved a world record but it was foul so now let's go back to work before Tokyo".

The unhappy dynamic was replicated in the men’s final, where Jamaica’s world champion Tajay Gayle produced the best jump of the competition, 8.29m, but could only finish second after fouling in the final-three finale, where Greece’s Militiadis Tentoglou claimed the win with 8.24m.

Britain’s Laura Muir, who yesterday pulled out of the 800m at the Olympics to concentrate on the 1500m in Tokyo, won in 1:56.73, with fellow Brit and training partner Jemma Reekie second in 1:56.96 - both personal best performances.

In third place Kate Grace of the United States set a third personal best of 1:57.20 since marginally failing to qualify at the US Olympic Team trials.

"Running 1:56 is giving me huge confidence for Tokyo," said Muir after what was her last race before the Olympics.

Of the 16 fastest performances of all time in this event, the 25-year-old double world champion owns half of them.

In the women’s 3,000m steeplechase Kenya’s world champion and record holder Beatrice Chepkoech was beaten once again by her compatriot, the 2015 world champion Hyvin Kiyeng, who won in a season’s best of 9:03.82, with Chepkoech second in 9:04.94.

Ronnie Baker of the United States won the men’s 100m in 9.91 from South Africa’s Commonwealth champion Akani Simbine, who recorded 9.98.