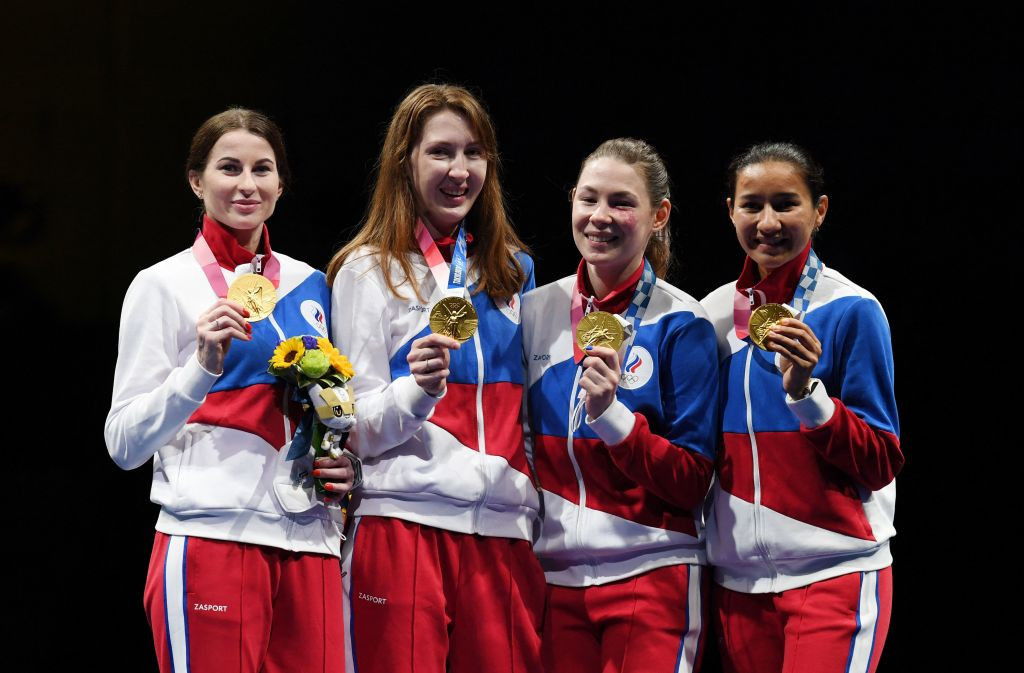 Earlier in the evening the Italian team - beaten 45-43 by France in the semi-finals - earned bronze with a comprehensive 45-23 win over a United States team containing the new individual women’s foil champion, Lee Kiefer.

Due to event rotation, this competition did not take place at the Rio 2016 Olympics, but the ROC team contained two fencers who won the world team title in 2019 in Larisa Korobeynikova and Inna Deriglazova, the Rio 2106 individual champion.

The other team member on the piste was Marta Martyanova.

The ROC team were strongly favoured to beat a French team that featured Ysaora Thibus, ninth in the Tokyo 2020 individual competition, Anita Blaze, who was 22nd and a member of the team that came fourth at the London 2012 Games, and Pauline Ranvier, who was 18th in the individual.

But the strength of the French esprit de corps to have beaten the exuberant Italian talents spoke volumes.

Korobeynikova got ROC rolling with a 5-2 win in the first contest against Thibus, and her team never trailed after that despite Ranvier beating Korobeynikova 7-5 in the penultimate personal duel in a desperate attempt to keep French hopes alive, and Thibus beating her two other opponents, Martyanova, who required medical treatment for a foot injury, and Deriglazova.

Deriglazova and Korobeynikova, both members of the Russian team which took silver in this event at London 2012, where gold went to Italy, can now reflect on a medal of an even more acceptable hue.

"Previously, I had other events but this one is a different emotion," said Deriglazova.

"It is a really emotional moment for me.

"It is for my family and my friends who really support us and everybody who supported not only me but also my team, and for all the coaches."

Martyanova commented: "I was injured but the most important thing for me was to understand that we don’t have any more changes.

"I didn’t have a chance to think about anything else but competing and make the touch.

"I tried not to feel the pain but to feel that I should support my team."

A disappointed Thibus added that France "proved in the semi-finals that nothing is impossible and that until the end we can come back.

"It didn’t happen in the final but the spirit was there."

Earlier in the evening the passion and desire of the Italian team overwhelmed the US, who managed victory in just one of the nine personal duels - the first one, where Nicole Ross got the better of Arianna Errigo, a member of Italy’s gold medal-winning team in 2012.

Even the presence of the new Olympic individual champion, Kiefer, could not turn things round for the Americans.

"It was difficult, but we thought about winning the bronze, not about the other medals we couldn't win," said Italy’s 2018 individual world champion Alice Volpi.

"We tried to do our best and we managed to do it together."

Meanwhile Kiefer said: "Hats off to the Italians.

"They fenced beautifully, they came out very strong.

"All of us feel heartbroken."