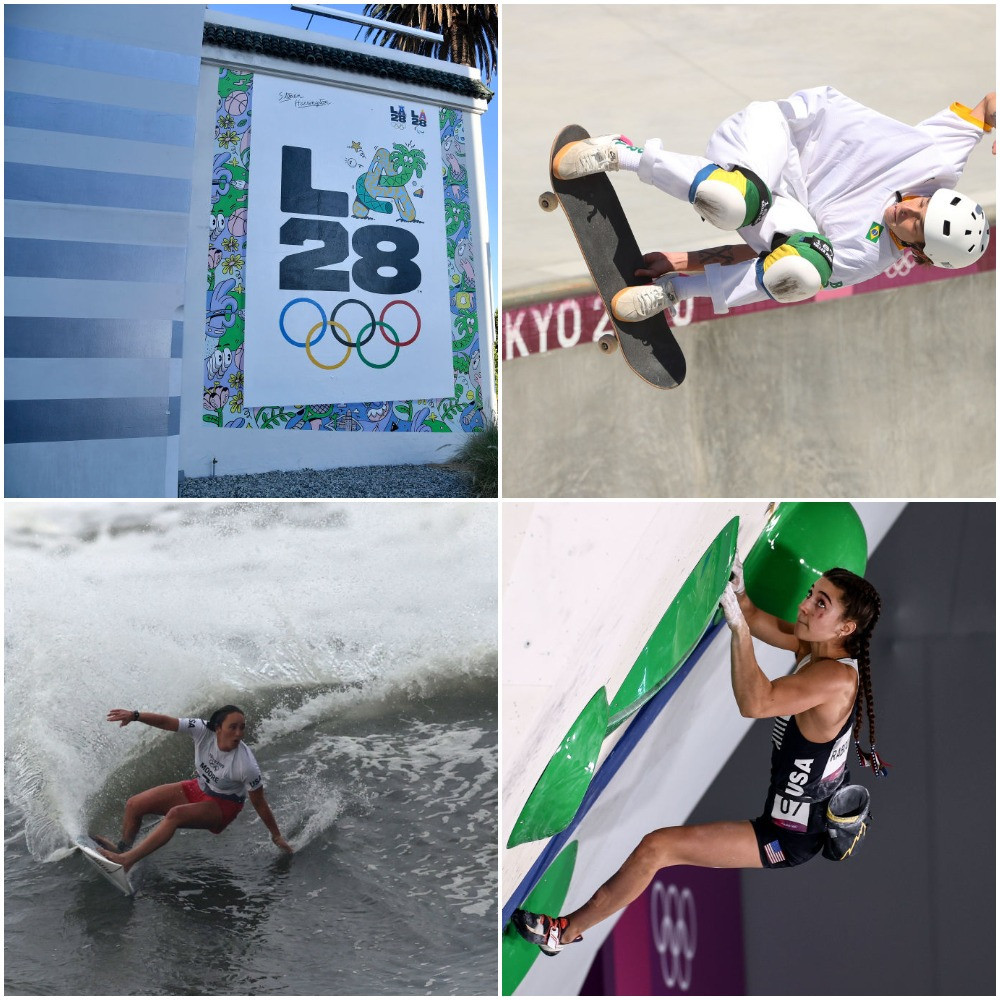 Skateboarding, surfing and sport climbing are set to be added to the core Los Angeles 2028 Olympic programme - but boxing, weightlifting and modern pentathlon have been left off the list of guaranteed sports for the Games.

The IOC said there would be a "pathway" for boxing, weightlifting and modern pentathlon to be part of the Games in the American city, provided they address concerns outlined by the organisation.

Football has retained its spot on the programme but the IOC said it would "continue to monitor the evolution of the international match calendar" following FIFA's controversial plan to hold the men's World Cup every two years instead of quadrennially.

Los Angeles 2028 is also able to propose additional sports in 2023.

Boxing, weightlifting and modern pentathlon have been left off the "initial programme" for the 2028 Games, and the respective International Federations have been given until 2023 to meet certain criteria to secure their spot at the event.

The International Modern Pentathlon Union (UIPM) must "finalise its proposal for the replacement of horse riding and for the overall competition format" before the sport can be included, IOC President Thomas Bach said.

Bach added the UIPM's proposal has to "demonstrate a significant reduction in cost and complexity, and improvement across the areas of safety, accessibility, universality, appeal for youth and general public".

It follows concerns stemming from the scandal at the Tokyo 2020 Olympics, where German coach Kim Raisner was sent home for punching the horse Saint Boy, which was one of those who refused to jump in the women's event.

The UIPM has been criticised by athletes for axing riding and for the process which led to the controversial decision.

IOC sports director Kit McConnell said testing on the replacement for riding would take place in the European summer before the UIPM submits its proposal by the end of 2022.

"The athletes need to be a central part of that process," McConnell said.

Long-running issues at the International Boxing Association (AIBA) and the International Weightlifting Federation (IWF), which led to the former being excluded from running the boxing tournament at Tokyo 2020 and the latter's place at Paris 2024 being provisional, have led to their omission from the initial Los Angeles 2028 programme.

Bach described AIBA and the IWF, which have consistently struggled with governance issues in recent years, as "problem children".

The IOC has left the door open for the embattled AIBA to be reinstated as the Olympic governing body for the sport in 2023, provided it adheres to a "roadmap" drawn up by the organisation on its finances, governance and refereeing and judging.

AIBA must "demonstrate it has successfully addressed the ongoing concerns around its governance, financial transparency and sustainability, and integrity of refereeing and judging process" for boxing to be included at Los Angeles 2028.

Bach warned the IWF has to show "its transition towards compliance and effective change of culture" and "must successfully address the historical incidents of doping in the sport and ensure the integrity, robustness and full independence of anti-doping" for weightlifting to feature at the 2028 Games.

The inclusion of skateboarding, surfing and sport climbing, which made their Olympic debut at Tokyo 2020 as additional sports and are due to feature in the same capacity at Paris 2024, will be put to the IOC Session in Beijing in February for approval, likely to be a formality.

It means they will be entitled to a share of the broadcasting revenue from Los Angeles 2028, which they will not receive from either Tokyo 2020 or Paris 2024, as they will be included as part of the 28 sports.

"We are eager to have the LA28 sport programme include some of the most iconic Los Angeles sports and welcome the IOC Executive Board’s proposal.

"These sports will bring fresh excitement and relevance to the Olympic Games in America and connect the Olympics with younger fans across Los Angeles and around the world."

Bach said the proposed inclusion of the three sports "is based on the success of Tokyo 2020, a commitment to innovation and also recognises the deep roots each of these three sports have in Los Angeles and in California".

The Los Angeles 2028 programme is due to be finalised in December 2024, the IOC said.