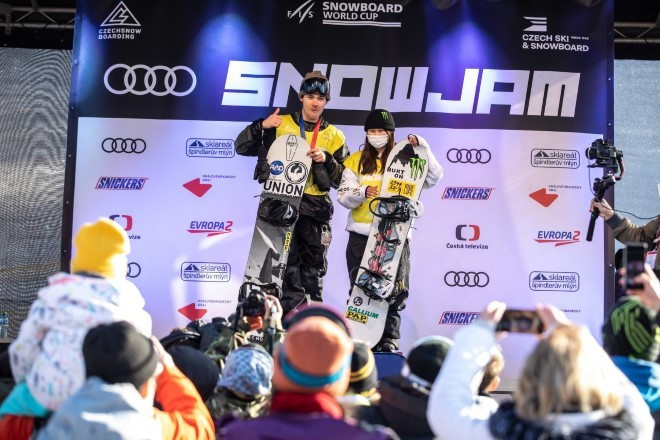 Tiarn Collins of New Zealand moved to the top of the Snowboard Slopestyle World Cup standings after triumphing in the season's penultimate round in Špindlerův Mlýn.

With the top six snowboarders heading into the event all missing the Audi Snowjam slopestyle World Cup in the Czech Republic, either due to injuries or other commitments, Collins knew a win would take him to the top of the standings.

After competition was delayed by an hour due to strong winds, Collins claimed victory with a score of 90.25.

Taiga Hasegawa of Japan finished fourth with 85.25, with the top five completed by Liam Brearley of Canada on 78.50.

In the overall men’s standings in the discipline, Collins’ victory moved him to the top on 200 points.

In second place is Germany’s Leon Vockensperger on 181 points, with Canadian Sebastian Toutant in third on 145 points.

The final round of the Slopestyle World Cup season is scheduled to take place at Silvaplana, Switzerland on March 27.

In the women’s World Cup at the same venue, Kokomo Murase of Japan, who topped qualifying yesterday, converted that into victory with a score of 89.25 points.

Murase's victory in Špindlerův Mlýn saw her seal the women's overall Park and Pipe Crystal Globe for the season, as she moved to a tally of 396 points in those rankings.

Murase was comfortably clear of second-placed Jasmine Baird of Canada on 76.25, with Ariane Burri of Switzerland in third with 72.25 to earn a first career World Cup podium.

Burri’s compatriot Bianca Gisler finished fourth with 64.75, with the top five completed by The Netherlands Melissa Peperkamp with 62.75.

The women’s snowboard slopestyle World Cup season is scheduled to conclude in Silvaplana on March 27.