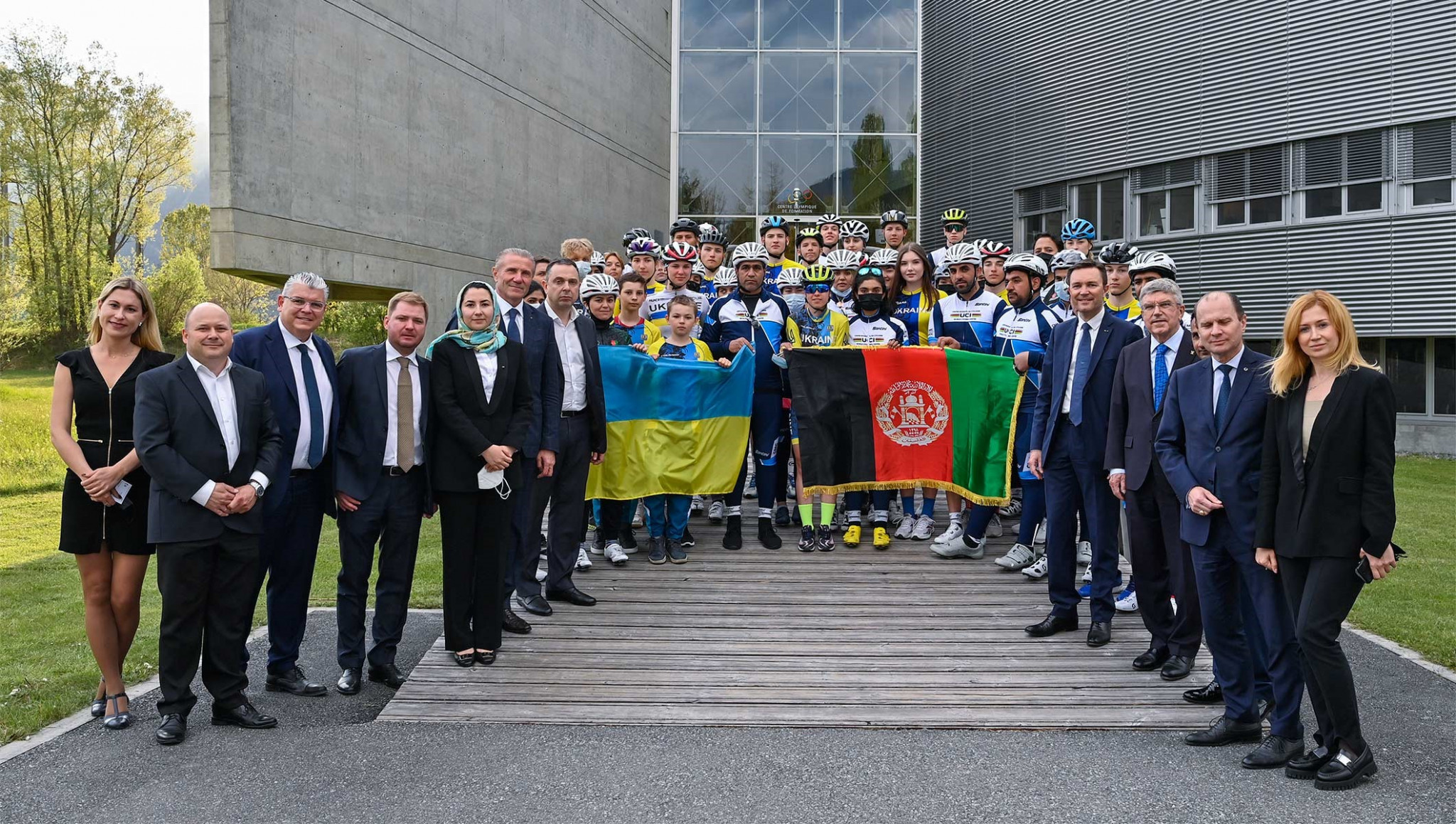 Three BMX, track and mountain bike cyclists from Ukraine are currently training at the World Cycling Centre, with a further 27 based in the Swiss National Centre after being evacuated from the war-torn country by Swiss Cycling.

A total of 23 road discipline cyclists from Afghanistan have also joined the World Cycling Centre during a humanitarian crisis following the Taliban's return to power.

Bach was joined by Ukrainian Minister for Youth and Sport, Vadym Guttsait, and IOC members Sergey Bubka and Samira Asghari of Ukraine and Afghanistan respectively.

Afghanistan Cycling Federation President Fazli Ahmad Fazli, Ukraine Cycling Federation secretary general Tatyana Diazdevych and the head of the Canton of Vaud's department of the economy, innovation and sport Philippe Leuba were also among those in attendance.

They were welcomed by UCI President David Lappartient, the Frenchman who earlier this year was made an IOC member.

Bach, Guttsait and Bubka, who has been tasked by the IOC with coordinating the Olympic Movement's humanitarian assistance to Ukrainian sport, then met at Olympic House in Lausanne to discuss the war in Ukraine.

Russia invaded Ukraine on February 24, and since then has been accused of committing war crimes against civilians, while Ukraine and Poland argued the attacks on residents of Bucha near the capital Kyiv earlier this month amount to genocide.

According to the United Nations (UN), at least 2,345 civilians have been killed in Ukraine since Moscow launched what it describes as a "special military offensive", and more than five million people have fled the country.

The UN Refugee Agency also reports 2.6 million registered Afghan refugees across the world, a number which it fears is likely to rise.

The Taliban, an Islamist group that believes in Sharia law, returned to power in Afghanistan following the withdrawal of American troops last year, prompting widespread concerns for women's rights and women's sport, which it views as un-Islamic.

There are international concerns over food shortages and extreme poverty in Afghanistan.

After his visit to the World Cycling Centre, Bach vowed that the IOC would offer support to athletes from both countries.

"It was moving to meet and hear from the Ukrainian athletes who are affected by the terrible war in their country," he said.

"There are dozens of cyclists and hundreds of Ukrainian athletes in other sports who can continue participating in international competitions through the help of the IOC and many stakeholders of the Olympic Movement like the UCI.

"I want to thank all of them.

"It was particularly touching to see that Ukrainian and Afghan athletes are both benefitting from the solidarity of the Olympic Movement.

"This reflects the true Olympic spirit.

"We will continue supporting Ukrainian and Afghan athletes in the same way as we support other members of the global Olympic community who are affected by war and aggression."

The IOC recommended that Russian and Belarusian athletes and officials are banned from international sports events following the invasion of Ukraine, and Guttsait offered his thanks for the support the country has received.

"I would like to express my gratitude for the solidarity and the efforts of the IOC and the international sport community to support Ukrainian people and Ukrainian athletes," the Minister said.

"We welcome the rapid decisions taken by the IOC with regard to Russia and Belarus, which have sent a clear and strong signal to the entire sport community that the IOC stands with Ukraine in this difficult time.

"I also want to thank the Olympic Movement for the Solidarity Fund set up to support our community, and in particular the Ukrainian NOC President, Sergii Bubka, who helps with the coordination efforts and stands by our side every day."

More than $2 million (£1.6 million/€1.9 million) has been donated to the Solidarity Fund, according to the IOC.

Bach also offered his backing to a "great initiative" referenced by Guttsait urging sponsorships of the re-birth of Ukrainian sports clubs and infrastructure after the end of the war.

UCI President Lappartient said the visit from key Olympic officials was important for athletes based at the World Cycling Centre.

"The UCI and our World Cycling Centre are committed to the wellbeing of the entire cycling family," he said.

"With the current crises in Afghanistan and Ukraine, it was obvious to us that we should put our accommodation and training facilities at the disposition of athletes who were in danger in their own countries.

"It is important that these young cyclists feel supported, and I am sure that the discussions and activities that took place here in Aigle will reinforce their feeling of security."

Earlier this month, Swiss Sports Minister and Federal Council member Viola Amherd called on the IOC to exclude officials from Russia and Belarus, and urged International Federations to follow suit.

The IOC cited the Olympic Charter in arguing Russian members "are not representatives of their country", and claimed its actions against Russia and Belarus "have been welcomed and followed by the Olympic Movement."