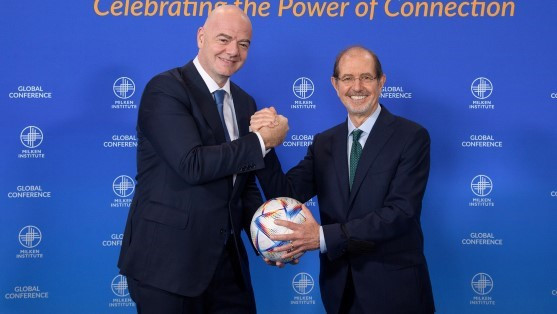 Blockchain technology company Algorand has been announced as a partner of FIFA, becoming the governing body's first new United States based sponsor since 2011.

FIFA said the agreement will see Algorand become the organisation's official blockchain platform, and it will provide a "blockchain-supported wallet solution".

Algorand will become a regional sponsor of the Qatar 2022 FIFA World Cup in North America and Europe.

The company will also serve as an official sponsor for the 2023 FIFA Women's World Cup in Australia and New Zealand.

"We are delighted to announce this partnership with Algorand," said Gianni Infantino, the FIFA President.

"The collaboration is a clear indication of FIFA's commitment to continually seeking innovative channels for sustainable revenue growth for further reinvestment back into football - ensuring transparency to our stakeholders and worldwide football fans - a key element of our vision to make football truly global.

"I look forward to a long and fruitful partnership with Algorand."

FIFA said blockchains allow non-editable data to be permanently recorded and distributed on digital networks, while facilitating innovations and ensuring safe, untampered exchange of value and assets such as non-fungible tokens, and through blockchain-enabled wallets holding digital assets.

As a technical partner, Algorand will assist FIFA in further developing its digital assets strategy.

FIFA will provide the company with sponsorship assets including advertising, media exposure and promotional opportunities as part of the agreement.

"This announcement is an exciting moment for FIFA, as it officially enters into the world of blockchain and the opportunities this presents across various applications," said Romy Gai, FIFA's chief business officer.

"At FIFA, we must constantly strive to identify and explore the most cutting-edge, sustainable and transparent means of increasing revenues to continue to support global football development.

"Algorand is clearly a forward looking, innovative partner that can help us achieve these goals."

Silvio Micali, the founder of Algorand, has claimed the partnership will "transform the way we all experience the world's game".

The agreement is the latest technology based deal involving FIFA.

Singapore based cryptocurrency trading platform Crypto.com was announced as a sponsor for the Qatar 2022 World Cup in March.

Algorand are the first US-based sponsor to partner with FIFA since Johnson & Johnson signed an agreement in 2011, for the Brazil 2014 men's World Cup.

Coca-Cola, Visa, McDonald's and Budweiser are long-standing sponsors of either FIFA or the FIFA World Cup.

The US Department of Justice (DoJ) had investigated numerous former FIFA officials since 2015 over corruption allegations.

The DoJ last year deemed FIFA to be victims of corrupt officials.