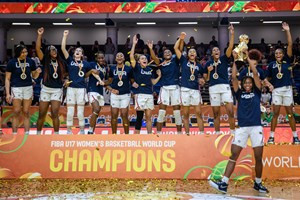 The United States sailed to their fifth Under-17 Women's Basketball World Cup title in six editions after comfortably defeating Spain in the final in Hungarian city Debrecen.

Led by tournament Most Valuable Player Juju Watkins, the US overcame their opponents 84-62 to add to their other trophies won at the International Basketball Federation event in 2010, 2012, 2016 and 2018.

After establishing a 24-13 advantage in the first quarter, the Americans were always in control of the match despite Spain winning the second.

Jaloni Cambridge starred for the US in the backcourt, finishing the game with 16 points, nine assists and six rebounds.

Breya Cunningham stood out in the frontcourt after tallying a 10-point, 10-rebound double-double.

Spain's silver medal is their third at the competition, having lost to the US in 2012 and 2014 finals.

"This group is amazing and it's great being surrounded by these girls and these amazing coaches, Spain is a great team and we had to really prepare for them," Watkins said after the final.

"We kept our composure throughout to get the win."

France overcame Canada 84-82 to win the bronze medal, thanks to a monstrous performance from Dominique Malonga, who scored an incredible 28 points and grabbed 17 rebounds.