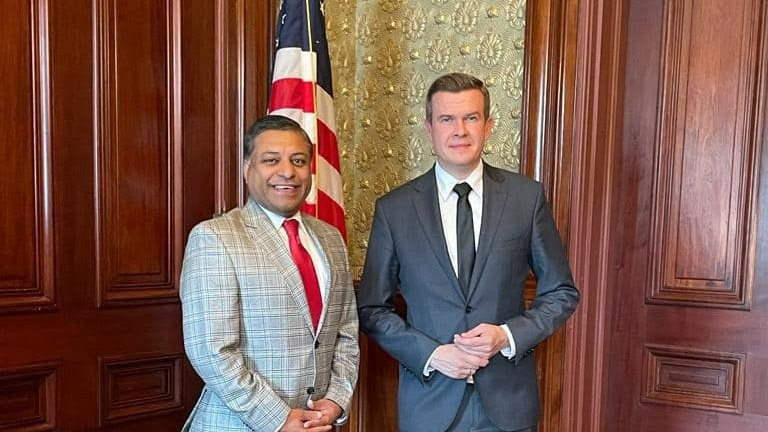 Leading officials from the World Anti-Doping Agency (WADA) visited the White House during a trip to the United States where they looked to establish a "united goal."

The meetings - which WADA described as "very productive" - included visiting the country's Office of National Drug Control Policy (ONDCP) at the White House.

WADA confirmed in January that it had received the remaining annual dues that it had been owed by the US, worth $1.3 million (£961,000/€1.2 million), before the end of the year.

Among the topics addressed in this week's meetings in Washington included the implementation of WADA's wide-ranging governance reforms.

A fruitful meeting in the White House with @DrGupta46, Director of US @ONDCP. We discussed the opportunities for our further close collaboration to strengthen the anti-doping system worldwide, as well as our solidarity and support for people and athletes of Ukraine 🇺🇦.@wada_ama pic.twitter.com/JetFOY98gK

WADA said there were also discussions about "encouraging further active cooperation between the United States and other nations, particularly in the Americas region" in a bid to ensure that the anti-doping community was "collaborating effectively and working together towards the same goal."

"From the very start, the United States has been a crucial partner for WADA and one of the leading countries whose efforts brought about the creation of the agency in 1999," said Bańka.

"I know how critical US leadership and engagement has been to protecting fair sport around the world.

"In particular, I would like to thank the Office of National Drug Control Policy and its director, Dr Rahul Gupta, for demonstrating a strong commitment towards protecting clean sports and support of WADA’s mission.

"It is only by working collaboratively towards a united goal that we can make real inroads towards WADA’s vision of providing a world where clean athletes can compete in a doping-free environment."

Niggli added: "These meetings in Washington have been a great opportunity to update our partners in the US on WADA's priorities and activities and to listen to their views and suggestions.

"From WADA’s perspective, they were very productive and much appreciated.

"Based on positive feedback received from those who participated, they feel likewise.

"It is vital that WADA leadership continues to meet with stakeholders to hear their perspectives and discuss how to further strengthen the national and international legal frameworks."

Today was a great opportunity to discuss the importance of scientific research to anti-doping. We met with US @NIDAnews to speak about developing our potential research partnership. Thank you for your contribution to protecting #cleansport and the health of athletes. @wada_ama pic.twitter.com/VWMUADmX8B

Other areas discussed at the meetings were WADA’s priorities and current areas of development and innovation.

The Russian invasion of Ukraine was another topic covered, looking at how WADA and other organisations are supporting Ukrainian athletes and the anti-doping community.

There were also talks about the Russian Anti-Doping Agency (RUSADA)’s compliance with the World Anti-Doping Code.

RUSADA was declared non-compliant with the World Anti-Doping Code in December 2019 after the country was found to have manipulated data at the Moscow Laboratory.

WADA initially imposed a four-year package of punishments, but this was cut to two years by a three-member Court of Arbitration for Sport (CAS) panel in December 2020.

Russia's name, flag and anthem is banned from World Championship and Olympic events, with the country also unable to host or be granted the right to stage major competitions "unless it is legally or practically impossible" for them to be moved elsewhere until December 16 of this year.

Russia, assisted by Belarus, invaded Ukraine just four days after the conclusion of the Beijing 2022 Winter Olympics on February 24.