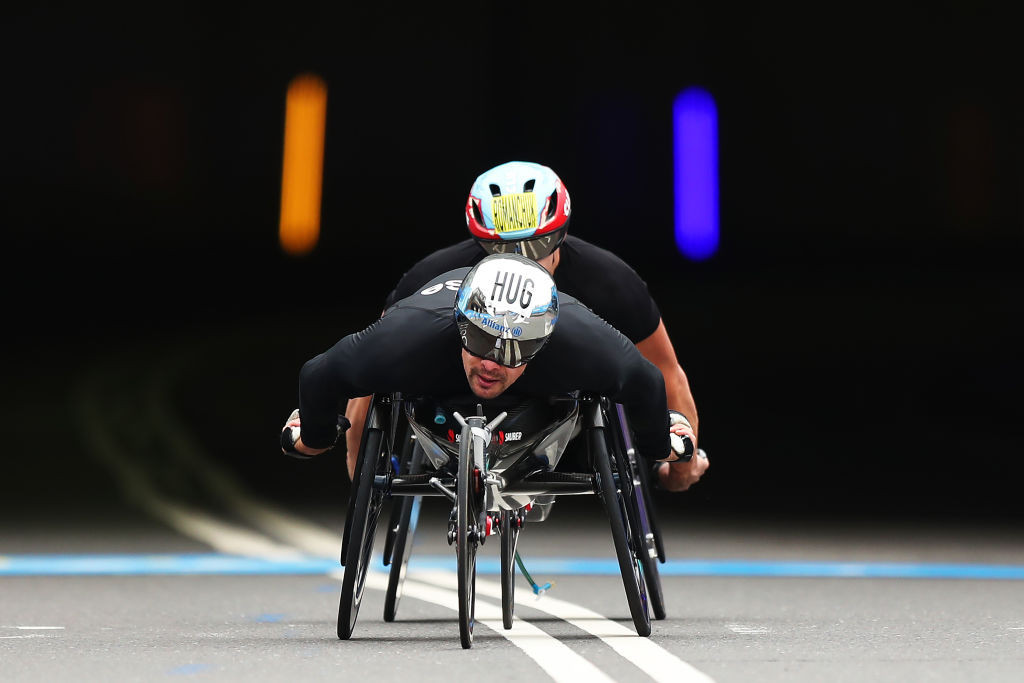 Switzerland ruled the London Marathon wheelchair race once again today as Marcel Hug improved upon his men's course record of last year by finishing in 1hour 24min 38sec after holding off a controversial late move from Daniel Romanchuk, and Catherine Debrunner was a runaway women's winner.

Eyebrows were raised as the 24-year-old American, Romanchuk, who won this race in 2019 and took bronze to Hug's gold in last year's Tokyo Paralympics marathon, tracked the leader for two thirds of the race without taking a turn at the front, and then tried to pass him on an inside line on the final turn.

Baroness Tanni Grey-Thompson, Britain’s 11-time Paralympic champion, commented on BBC TV: "Marcel Hug was in front and took a fair line there - he's a very gracious athlete but he might not be terribly happy with that.

"Even though it's not against the rules it is not ideal to have someone sat behind and not do a scrap of work in the race as Daniel Romanchuk did."

Hug, who won in Berlin last Sunday was in front from the 5 kilometres mark, and was clearly frustrated by the reluctance of his fellow leader to share the load before bettering his course record of 1:26:27 from last year to earn a fourth London win.

Romanchuk finished two seconds behind the winner and Britain's 43-year-old David Weir, seeking a record ninth London title in his 23rd consecutive participation in the race, won a bunch sprint for third place, to his obvious satisfaction, clocking 1:30:41.

"That was a really tough race out there today, one of the toughest," Hug said.

"Dan was so strong today and I did everything I could to break away.

"I tried to up my pace to make him tired, but he was just too strong.

"I think that was one of his best performances of all time.”

Debrunner, who broke four track world records in four races in the home venue of Nottwil in May, won her marathon debut in Berlin last Sunday and followed up with another dominant victory in a race which suffered two significant overnight withdrawals as illness prevented the participation of Australia's Paralympic and Commonwealth champion Madison de Rozario and fellow Swiss racer Manuela Schär, whose 2021 course record of 1:59:32 she beat with a time of 1:38:24.

Susannah Scaroni of the United States was runner-up in 1:42:21, with Britain's Eden Rainbow-Cooper third in a huge personal best of 1:47:27.

There was also an increased prize money for the top 10 finishers in the race and extra bonuses for course records.