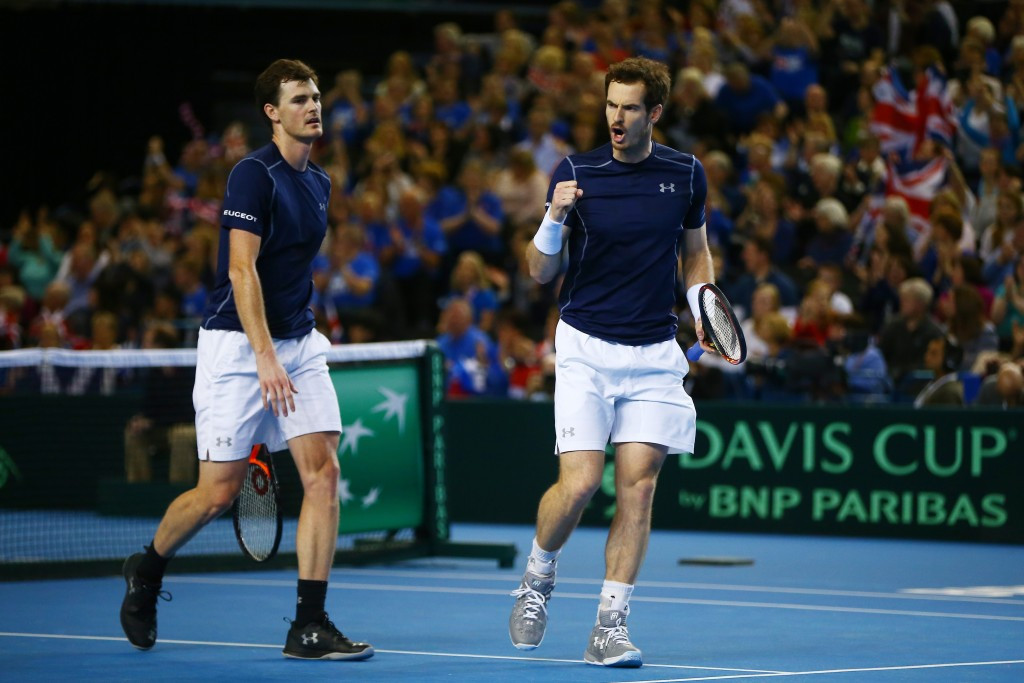 Scottish brothers Andy and Jamie Murray combined in the doubles to put defending champions Great Britain 2-1 ahead in their Davis Cup first-round tie against Japan in Birmingham.

The siblings defeated Yoshihito Nishioka and Yasutaka Uchiyama 6-3, 6-2, 6-4 to stretch their unbeaten Davis Cup record as a pairing to five matches and put the hosts one win away from a third successive World Group quarter-final.

They didn't face a single break point as they saw off their opponents, both of whom are ranked outside the world's top 300 in doubles, in one hour and 53 minutes.

Andy Murray, the two-time Grand Slam singles champion, made the initial breakthrough with a return winner for a 5-3 lead in the first set.

Two breaks of serve in the second left Japan with an uphill battle, and despite holding their own in a closely-fought third, Britain broke for 5-4 before Andy Murray clinched victory with an ace.

"We know each other's games extremely well - so that helps," said Andy Murray.

"When the ball goes into a certain part of the court I know what shot he will hit and vice-versa.

"My strengths and his strengths make a decent team.

Andy Murray will aim to wrap up the tie for the holders when he meets Kei Nishikori tomorrow.

Evans, ranked 157th, will go up against world number 87 Taro Daniel if a decisive fifth rubber is necessary.

Like Britain, the United States took a 2-1 lead in their encounter with Australia as Bob Bryan and twin brother Mike beat Lleyton Hewitt and John Peers 6-3, 6-3, 4-6, 4-6, 6-3 in a thrilling doubles contest in Melbourne.

Six weeks into his retirement, player captain Hewitt decided yesterday to compete for his country and extend his Davis Cup playing record to a 42nd tie.

But despite helping Australia come from two sets behind to level the match, the 35-year-old was powerless to prevent the 37-year-old Bryan brothers from pulling away in the final set as they conceded just two points on serve.

Elsewhere, world number one Novak Djokovic and Serbian doubles partner Nenad Zimonjić fell to a 3-6, 6-7, 5-7 defeat at the hands of Kazakhstan's Andrey Golubev and Aleksandr Nedovyesov.

The result gives Kazakhstan a 2-1 lead ahead of tomorrow's singles matches.

Italy's Simone Bolelli and Andreas Seppi beat Switzerland's Marco Chiudinelli and Henri Laaksonen to give their country an unassailable 3-0 lead.

France's Richard Gasquet and Jo-Wilfried Tsonga overcame Canada's Philip Bester and Vasek Pospisil to put their tie to bed at the earliest opportunity.

Argentina's 2-0 advantage was halved by Poland, while Czech Republic and Croatia moved into 2-1 leads against Germany and Belgium respectively having ended yesterday level.