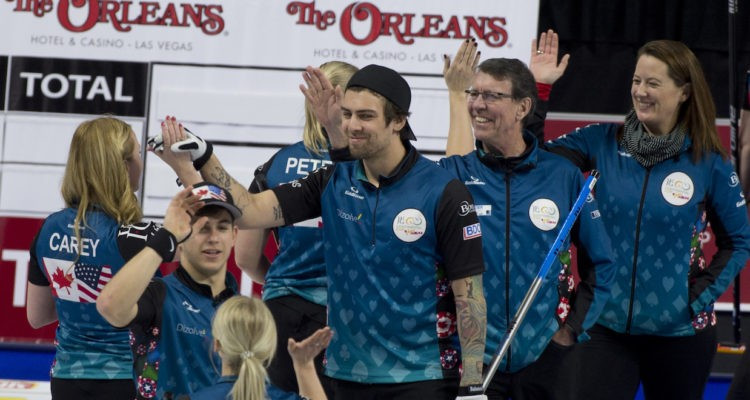 North America collected two points in today's evening session at the Orleans Arena in Las Vegas as they edged closer to retaining the Continental Cup of Curling.

Those points put the home team on the verge of a fifth consecutive title in curling’s version of the Ryder Cup.

North America will now take a 19-11 lead over the Rest of the World into tomorrow's skins competitions, after successful morning and afternoon sessions prior to their evening joy.

A total of 60 points are available, meaning the side that earns more than 30 points will be declared the champion.

The North Americans claimed a narrow 30½–29½ success at the 2016 event, which was also held in Las Vegas.

In the evening session, Reid Carruthers produced an impressive 7-5 win over the Rest of the World's Thomas Ulsrud of Norway, the 2014 world champion.

Jamie Sinclair of the US added a second point to the North American total after she overcame reigning world champion Binia Feltscher of Switzerland 6-2, while Sweden’s Niklas Edin managed to prevent a clean sweep for the hosts as he secured a 5-2 win over Canadian Kevin Koe.

Earlier in the day, North America produced a clean sweep in the afternoon session.

Canadian Chelsea Carey claimed a 6-5 win over Sweden’s Anna Hasselborg, while her compatriot Jennifer Jones raced to an 8-2 win over Japan’s Satsuki Fujisawa.

Heath McCormick’s 6-4 triumph over Denmark’s Rasmus Stjerne completed the hosts' dominance and ensured another win for a Canadian.

It meant that the Americans led 17-10 before the evening games.

"The skins day, there are so many points up for grabs and anything can happen," said Jones.

"So you want to take as big of a lead as you can into that last day.

"We’ve been here before when we’ve lost and it’s not a lot of fun, so we want to do our best to put as many points on the board as we can."

Two North American victories gave them the perfect start to the day.

The Rest of the World managed to recover two points, however, as Agnes Knochenhauer and Rasmus Wranå defeated Amy Nixon and McCormick 8-1.

Tomorrow's skins matches are played for the remaining 30 points, with point values assigned to each end.

One half point is awarded to the winner of each of the first six ends while one point is given for each of the seventh and eighth ends.

There are six skins games in all.

These points are combined with those earned in earlier matches to determine the winner.