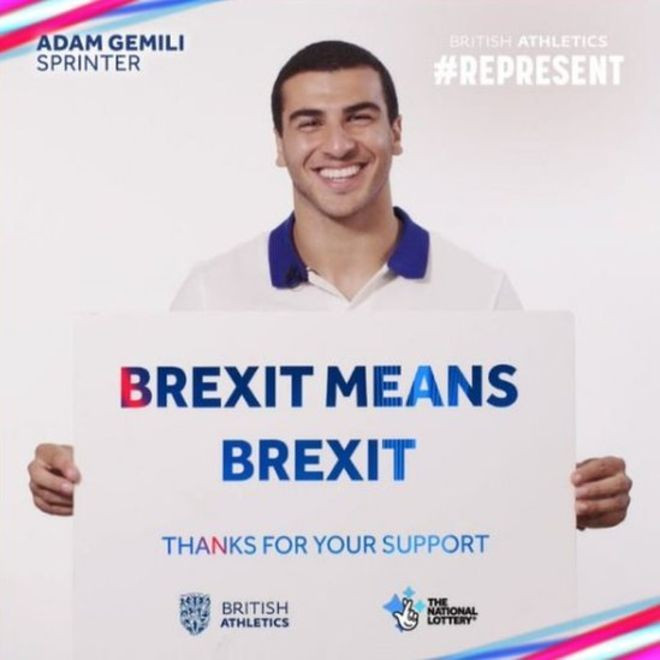 The National Lottery has apologised after an online attempt to thank the British public for their support for home athletes at the International Association of Athletics Federations (IAAF) World Championships backfired after being abused by online trolls.

Those doing so would automatically receive a thank you tweet in which their user name would be held up in a sign displayed by a member of the British athletics team.

It was hijacked when users switched their accounts to fake and controversial names.

Team captain Eilidh Child, who featured in the 400m hurdles final last week before winning a silver medal in the 4x400m relay, was pictured with another, claiming that Manchester United and French footballer "[Paul] Pogba is overrated".

Replies were sent out automatically, so the tweets - of which others referred to missing child Madelaine McCann and the death of former British Prime Minister Margaret Thatcher - were posted before being examined.

They have since been removed.

"We are aware that some people are maliciously targeting our British Athletics Twitter campaign with offensive and abhorrent content," tweeted National Lottery in response.

"We are dealing with this as quickly as possible and are hugely sorry for any offence caused by this malicious act."

A late flurry of four relay medals propelled Britain to meet their target of six medals at the IAAF World Championships.

The men's 4x100m relay triumph followed a 10,000m success for Mo Farah on the opening night of competition.