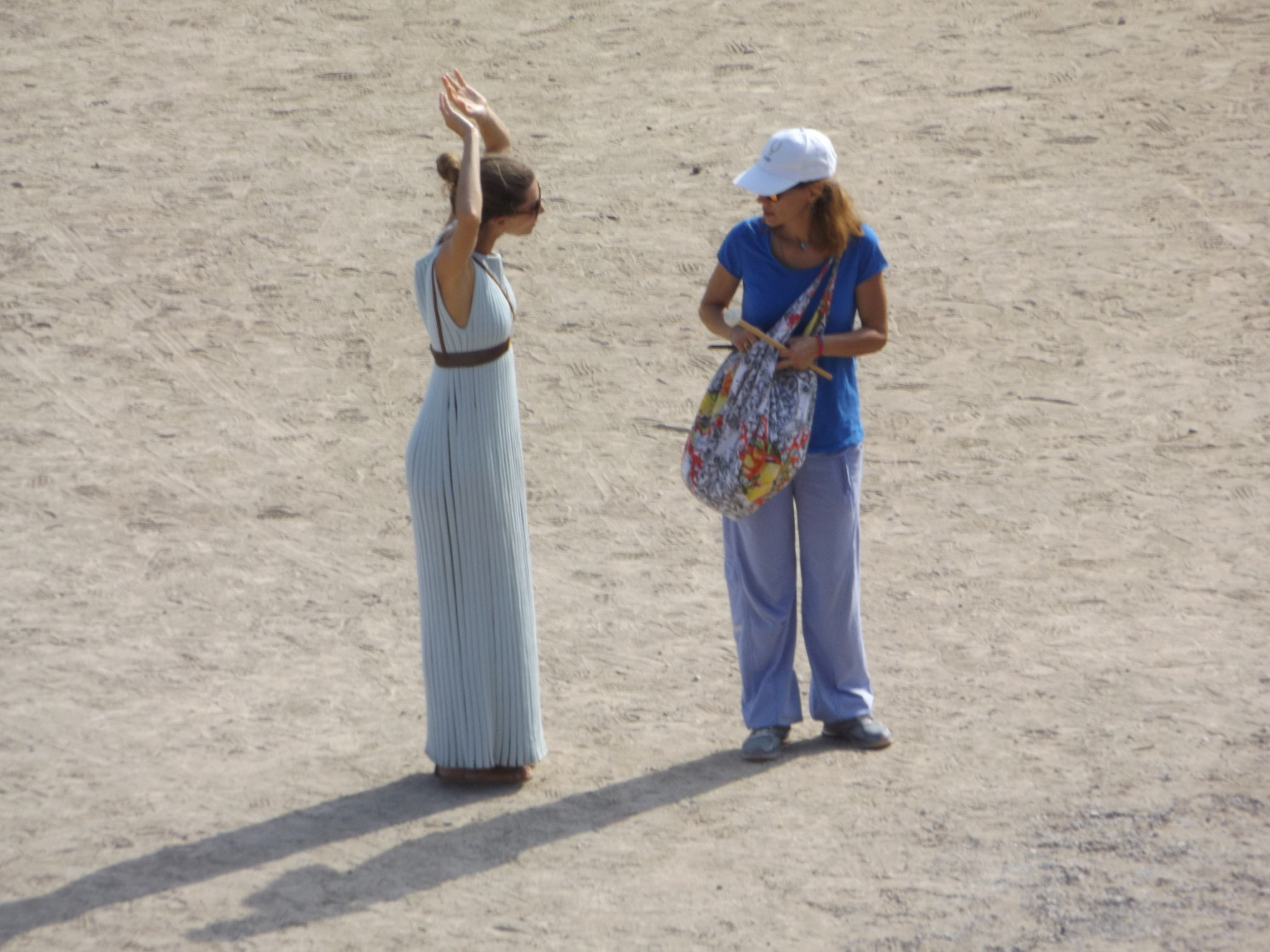 Every time this week that the flame lighting ceremony for Pyeongchang 2018 has been rehearsed, a flame has been lit and kept safely in a special lantern.

They have been doing so to a backdrop of a blue sky and temperatures around 26 degrees, but the flame lit in the penultimate rehearsal tomorrow may well be the one used to light the first Torch in the ceremony itself.

The gloomy forecast for the actual day of the ceremony on Tuesday (October 24) is rain.

Choreographer Artemis Ignatiou dismissed rumours that everything will be forced indoors, but the fact remains that the ceremony is at the mercy of the weather.

If the sun does not shine the flame cannot be lit, regardless of the fact that Prokopios Pavlopoulos, President of Greece, and South Korean Prime Minister Nak Yeong Lee, will be joining International Olympic Committee (IOC) President Thomas Bach for the occasion.

Such thoughts did not deter local schoolchildren, each dressed in one of the colours of the Olympic flag, who went through their paces with the priestesses, who are all dancers and actresses drawn from the National Theatre.

Although the High Priestess Katerina Lehou remains from Rio 2016 and the dancers wear identical costumes, organisers have promised some subtle changes on the big day.

Back in ancient times, Olympia was the centre of the sporting world and it reclaims that position during this ceremony every two years.

In fact, almost every shop and hotel seems to have at least one Olympic artifact.

By the old town hall, the flags of Greece and South Korea hang proudly.

The flags of the other competing nations festoon the streets and a few hundred metres further on stands a famous landmark which will be an important staging post in the ceremony.

Apostolos Angelis is the first runner in the 2018 Relay and when he leaves the stadium with the flaming Torch, he will turn towards a tree-lined grove.

His run will take him towards a brilliant white marble column erected in honour of Pierre de Coubertin, the Frenchman who devoted much of his life to the revival of the Olympic Games.

Coubertin's heart was interred here after his death in Geneva exactly 80 years ago.

Angelis, a cross-country skier who will compete in his second Winter Games in Pyeongchang, will stand for a few moments in silent tribute before leaving and handing the Torch to the second runner, former Manchester United footballer Ji-Sung Park, himself an Olympian and ambassador for Pyeongchang.

The monument was erected nearly 80 years ago.

Coubertin visited Olympia to see the work of archaeologists who had been excavating the site of the Ancient Olympics.

A few months after his death in 1937, Olympic officials including IOC President Count Henri Baillet-Latour gathered in Ancient Olympia to carry out his wishes with the erection of a memorial obelisk.

An official train carried Crown Prince Paul and the official party to the ancient site.

The Prince placed the small casket containing Coubertin's heart inside the monument.

"Allow me to assure you that the hearts of many Frenchmen beat in unison with the Greeks."

Comte Berthier de Savigny represented the Coubertin family and a telegram was sent to Madame Coubertin.

"Have piously laid to rest the heart of the renovator of the Olympic Games Pierre de Coubertin," it read.

Other Olympic representatives included the Duke of Mecklenberg, the German Karl Ritter von Halt and the Marquis de Polignac of France.

Poland's 1928 discus champion Halina Matouschevska, and Peter Lunn, a British skier who competed at the 1936 Winter Games, were both presented with the traditional crown of olives as the mark of a champion.

In previous years, the Coubertin Grove was where the first runner in a Winter Relay received the Torch from the high priestess.

That tradition was changed after 2006 when a terrible fire devastated the region, with former champions among those to replant the trees.

Since the Vancouver 2010 Games, the first bearer has always received the Torch within the confines of the Ancient Stadium in similar fashion to the Summer Games.