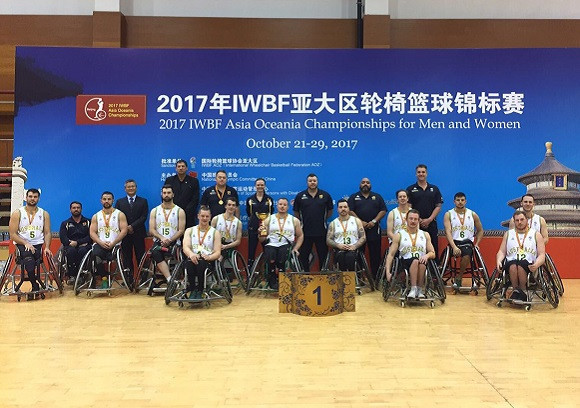 The Rollers beat Iran 80-54 in the final at the Chinese Paralympic Training Venue.

The outcome was a repeat of the 2015 final when they had defeated the Iranians 78-60.

Australia led for the entire contest but had to withstand a couple of charges from Iran before finally putting them away in the second-half.

Shaun Norris was the winning team’s top scorer with 18 points followed by Tom O'Neill-Thorne with 13.

Kim Robins and Brett Stibners were the two other Australian players to reach double figures with 10 points apiece.

CONGRATULATIONS Aussie Rollers 🇦🇺who take home the 🏆🏅with a 80-54 win over Iran 🇮🇷 in the final of #2017AOZChamps #wheelchairbasketball pic.twitter.com/Z0rnSBcgup

Australia, Iran, Japan and South Korea had already secured the four men’s qualification spots on offer for the 2018 IWBF World Championships, scheduled to take place in German city Hamburg from August 17 to 26.

They did so by reaching the semi-finals.