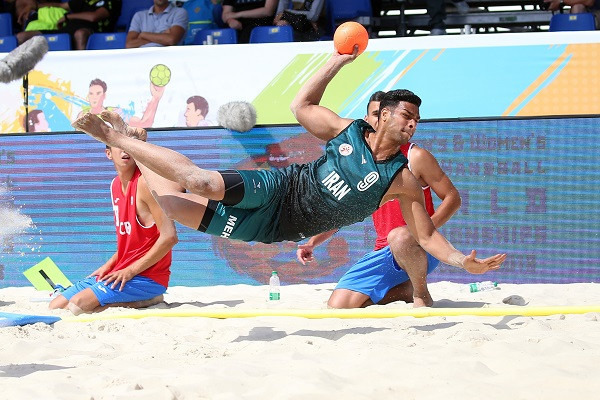 Defending men's champions Croatia confirmed their advance to the main round as Group A winners at the Beach Handball World Championships in the Russian city of Kazan today.

Croatia rounded off their group matches at the Beach Sport Complex with a 2-0 win over Iran today, and are due to play Vietnam and Hungary tomorrow before meeting Spain on Friday (July 27).

The International Handball Federation (IHF) competition will conclude with knock-out matches over the weekend.

Iran also move through to the main round despite their defeat today, as Uruguay’s 2-1 win over Argentina meant the latter were eliminated as bottom team in Group A.

In Group B, Spain and Hungary had already advanced after winning their two opening games, but Spain took the overall group honours with a 2-1 win over their rivals today.

Vietnam ensured their progress at the expense of New Zealand, whom they beat 2-1.

Oman finished off their Group C matches with a 2-1 win over Qatar, who nevertheless finished top.

Denmark secured second position with a 2-0 win over Australia, who thus finished last and moved to the consolation round.

They will be joined there by the United States, who finished without any points in Group D following a 2-1 defeat by Sweden, who headed the table.

Russia claimed second place with a 2-0 win over Brazil.

Defending women’s champions Spain matched the achievement of their male counterparts as they finished their group matches with a 2-0 win over Australia that consigned the latter side to elimination.

Greece beat Paraguay 2-1 in the remaining Group A match.

In Group B, Poland completed their unbeaten record with a 2-0 win over Uruguay, while a 2-1 defeat by Chinese Taipei consigned France to the elimination position at the bottom of the table.

Brazil finished top of Group C thanks to a 2-0 win over Thailand.

Hosts Russia ensured they went through too, in second place, after a 2-0 win over the United States that meant the latter team finished bottom of the group and failed to progress.

Vietnam claimed the third and final qualifying position at the expense of Mexico, whom they defeated 2-1.