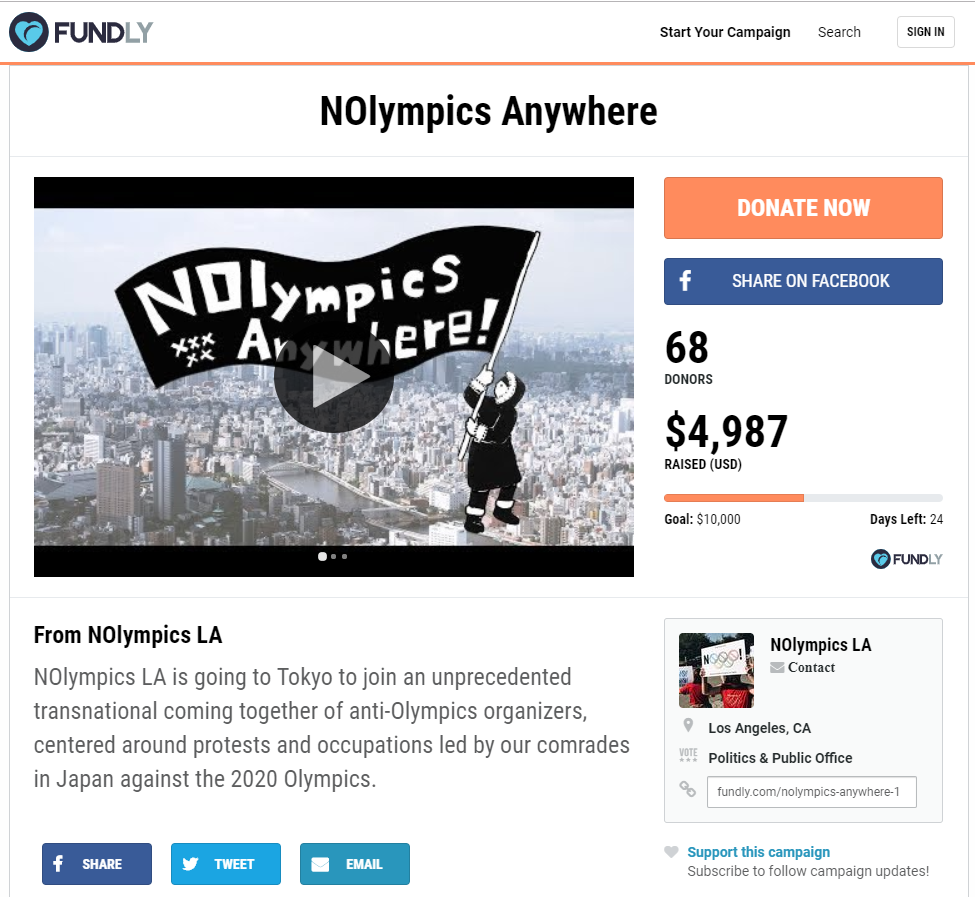 NOlympicsLA has announced plans to travel to Tokyo to take part in a “historic series of events” when anti-Olympics groups stage protests in the Japanese capital in July.

NOlympicsLA, who had hoped to emulate the success of "No Boston Olympics" which had led to the American 2024 bid being scrapped, is calling for financial support to attend the event.

“We're eager to help spread the word of this unprecedented event and intend to use the potential of a global audience to further our organising efforts and to raise awareness of the corrosive effects of the Olympic Games across the world,” NOlympicsLA said.

The group says it will join fellow organisers HanGorin No Kai, who have been protesting against the Olympic Games in Tokyo.

It is claimed a series of protests, occupations and academic symposia centred on the effects of the Olympics will take place in July, one year prior to the Olympic Games.

Anti-Olympics organisers from past, current and future host and bid cities will participate, it is claimed.

NOlympicsLA believe the event will have the power to “spearhead movements and save communities from ruin”.

“The Olympics are a global project spearheaded and funded by transnational actors that hop from city to city and country to country without consequences or accountability,” NOlympicsLA’s fundraising page states.

“We have a lot to learn from cities who have hosted or will host the games before us, and have been invited by organisers in Tokyo to share our experiences and strategies.

“In fact, this coming together of anti-Olympics organisers from so many host cities and bidding cities in recognition of that need for a transnationally linked and informed struggle will be an historic first.

“This is an unprecedented coalition coming together not just to push the Olympics out of an individual city or country, but to say that the Olympics in its current form should not exist anywhere.

“The participation of representatives from all affected cities is a must.”

Help us get to Tokyo this summer for the first ever summit of transnational Olympic resistance movements!

Here’s @MaraWilson to tell you more.

NOlympicsLA's aim is to fundraise to send nine people to Japan for the event, fully funding five who are not able to self-fund or secure institutional funding.

It says three of the five will represent different organisations from within the NOlympics coalition, including Strategic Actions for a Just Economy and the LA Tenants Union.

The group believes it will be crucial to support a bilingual member to enhance collaboration.

NOlympicsLA is attempting to raise $10,000 (£7,700/€8,900) to achieve flights, accommodation, transportation and translation costs and for fundraising and merchandise expenses.

Backers of the fundraising campaign will be able to secure a “mythbusting” stickerpack or branded t-shirts depending on the amount they contribute.

Around half of the funding aim has been reached to date.

Campaigners against the Paris 2024 Olympic Games and the former No Boston Olympics group are also expected to attend the event in Japan.