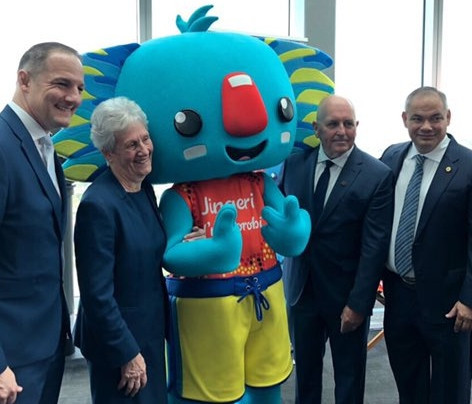 Gold Coast 2018 mascot Borobi, a blue male surfing koala bear, is to have his own special day, it was announced here today.

"Borobi Day" will be celebrated on May 31 this year, it was revealed, at a special event attended by Commonwealth Games Federation President Dame Louise Martin and Gold Coast Mayor Tom Tate.

Last month, it was announced Borobi had been bought out of retirement as an animated Indigenous language champion.

"Borobi means so much to millions of people so it is only appropriate that he has his own special day," said Tate.

"His Indigenous role is invaluable as we all look to learn more about the Yugambeh people, their culture and language.

"I encourage all Gold Coasters to get behind and celebrate Borobi Day."

It is planned to use "Borobi Day" to encourage local people to speak the Yugambeh language as much as they can.

"We’re thrilled to support 'Borobi Day', which will continue the legacy and impact of one of our best-ever Games mascots," Dame Louise, who has been attending the SportAccord Summit here, said.

"Borobi captured the hearts and minds of spectators and athletes at Games time and also raised awareness and understanding of the traditional owners of the land on which the Games were held.

"We’re delighted to see Borobi back in action, continuing to support the Yugambeh Language Group as part of its ongoing educational work."

"Borobi was such a big hit leading up to and during Gold Coast 2018 it is fitting that he gets his own day," he said.