Fifteen sports and 21 disciplines will be contested at Minsk 2019.
Thirteen venues will host events at the second European Games.
The Opening and Closing Ceremonies of the second European Games will take place at the Dinamo Stadium, which will also host the athletics events.
Minsk is the capital and largest city of Belarus, situated on the Svislač and the Nyamiha rivers.
Minsk has a population of 1.98 million people.
The Minsk 2019 mascot is Lesik the Fox who represents friendship, development, harmony, discipline, determination, cheerfulness, invincibility and vigour!
Lesik is pretty easy to spot with his red hat, white and green shirt, black shorts, blue shoes and yellow fur. These same colours are used on the Minsk 2019 logo.
One-hundred-and-ninety-nine medal events will be contested at Minsk 2019; 91 men’s events, 89 women’s events and 19 mixed events.
In all, 4,022 competitors will take part over 10 days.
The European Games take place every four years, the first of which was held in Baku, Azerbaijan in 2015.
Eight sports taking place at the European Games will serve as qualifiers for the Tokyo 2020 Olympic Games.
Minsk was elected as the venue for the second European Games on October 21, 2016 at the General Assembly of the EOC.
Fifty One European National Olympic Committees will be represented in the Belarusian capital during the Games.
Belarusian athletes won 43 medals at the first European Games - 10 gold, 11 silver, and 22 bronze - and finished seventh on the medal table.
The second European Games will be held at the largest sports facilities in Minsk, such as stadium “Dinamo”, “Minsk-Arena” and “Chizhovka-Arena”.
More than 8,000 volunteers will help prepare and stage Minsk 2019.
Minsk 2019 volunteers are assigned to one of 20 roles ranging from spectator services, hospitality, venue management, medical services, transport and protocol assistants.
Belaruskali is a Premium Partner of Minsk 2019 whilst Yasna-Beltelecom, MTS, Fabrika Reklamy, Belarusbank, UNICEF and LUCH are National Partners.
Faroe Islands will be able to compete for the first time at the second European Games in archery, badminton, judo and table tennis.
The first buyer of a paper ticket was Minsk 2019 mascot Lesik, the baby fox.
The programme of the European Games also includes the European Judo Championships which will gather the best athletes in the Chizhovka Arena.
The second European Games will be held under the motto Bright Year, Bright You.
The logo of the second European Games has been inspired by the slogan “Follow Your Dream”.
A Minsk Guest Card has been designed for tourists coming to the Belarusian capital and provides discounts and bonuses for museums, shopping centres, restaurants, and cafes.
Minsk is characterised by long avenues and neoclassical grandeur.
Previous Next
News
Countries
Sports
Bright Year, Bright You
Venues
Venue Map
Schedule
Volunteers
Flame of Peace
Mascot - Lesik
Come to the Games!
Minsk 2019 TV
Social Hub
Torch Lighting
Week One
Week Two
Week Three
Week Four
Week Five
Week Six
Week Seven
History of Torch Relays
Flame of Peace map 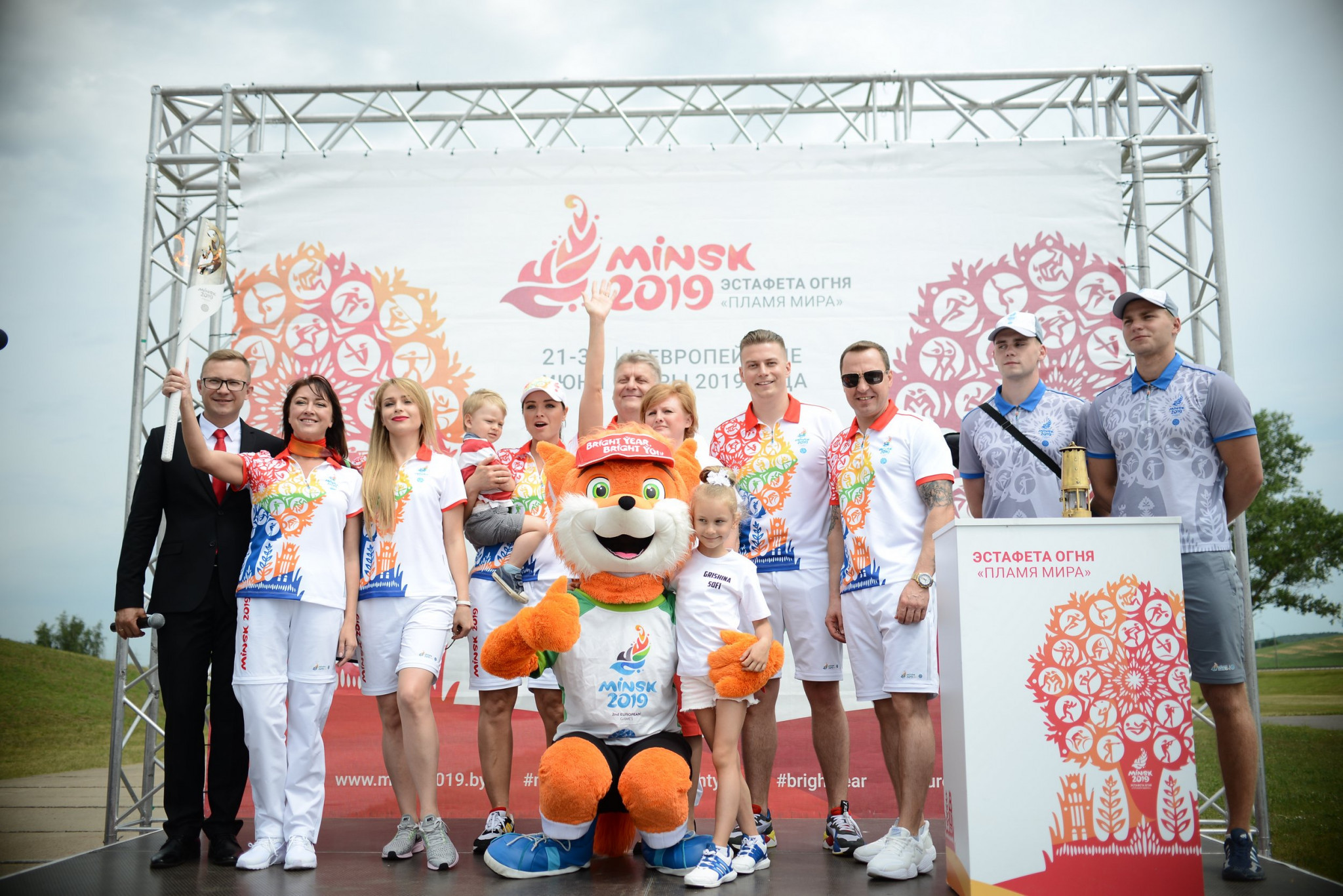 The lighting of the cauldron in Dinamo Stadium in Minsk will tonight provide the spectacular climax to the European Games Opening Ceremony.

On the eve of the Games, the Flame visited the botanical gardens in Minsk where the first bearer was ex-ice hockey star Alexey Kalyuzhny, a former Belarus player of the year and a star forward with Dinamo Minsk and the national team in a career spanning 20 years.

People’s Artist Valentin Elizariev carried the Flame up the steps of Bolshoi Theatre and was greeted by a full orchestra playing in the open air.

The safety lamp was later placed in the theatre stalls during rehearsals.

Minsk 2019 chief executive Georgiy Katulin was also a bearer and joined athletes at a welcome ceremony in the Village.

The Flame will not be seen in public again until it arrives at the stadium tonight.

The Relay had captivated much of the host nation during its 50-day progress from Rome.

In May, a trio of Belarusian Olympic champions spanning the generations received the Flame of Peace.

The Flame left the Eternal City flanked by Harley Davidson motorcycles ridden by members of The One Chapter Belarus, who escorted the Torch throughout its journey.

"I was especially surprised by these strong guys on bikes who have already covered thousands of kilometres," said Austria’s Chef de Mission Christoph Sieber, an Olympic sailing champion at Sydney 2000.

Before reaching Belarus, the Flame had toured neighbouring countries.

Climbers from the Belarus Mountaineering Federation had ascended to the summit of Mont Blanc as the first great set piece of the relay.

In Budapest, 98-year-old Ágnes Keleti, the oldest living Olympic champion, carried the Flame in one of the most poignant moments.

Keleti won five Olympic gold medals in gymnastics despite a career disrupted by the war and civil strife in her homeland.

In the Czech Republic, the Flame was taken to Brno where the Czech Olympic Committee had organised a sports activity day and in Poland, the Torch arrived at the Jean Paul II Olympic Centre in Warsaw.

When the Relay reached Belarusian soil in Brest, Nesterenko was on hand to carry the Flame for a second time and Hancharou later repeated his opening-night run, although this time for rather longer than the few metres in Rome.

As the Flame made its way through the regions of Belarus, great prominence was given to the liberation from Nazi occupation in 1944.

When the Flame reached the outskirts of Minsk, the runners visited the Mound of Glory memorial.

It had earlier journey to Mir Castle where it was greeted by guards in medieval costume and also the national parks of Belarus, to emphasise a connection with the environment.

Although performers in the Opening Ceremony were put through their paces with the a sunlit final rehearsal yesterday, the lighting of the cauldron remains a closely-guarded secret.

Speculation about the identity of the final runners will intensify.

Biathlon superstar Dariya Domracheva has already carried the Flame but those from earlier in the relay have often appeared at its climax.

That could also apply to Belova and perhaps even the man who lit the Minsk cauldron at the 1980 Olympics, wrestler Alexander Medved.

Then there are gymnasts such as Nelli Kim, a Minsk ambassador.

One other name not yet mentioned is Olga Korbut, perhaps the most famous Belarusian gymnast of them all.

Whoever is chosen, the Minsk 2019 organisers are not short of options.