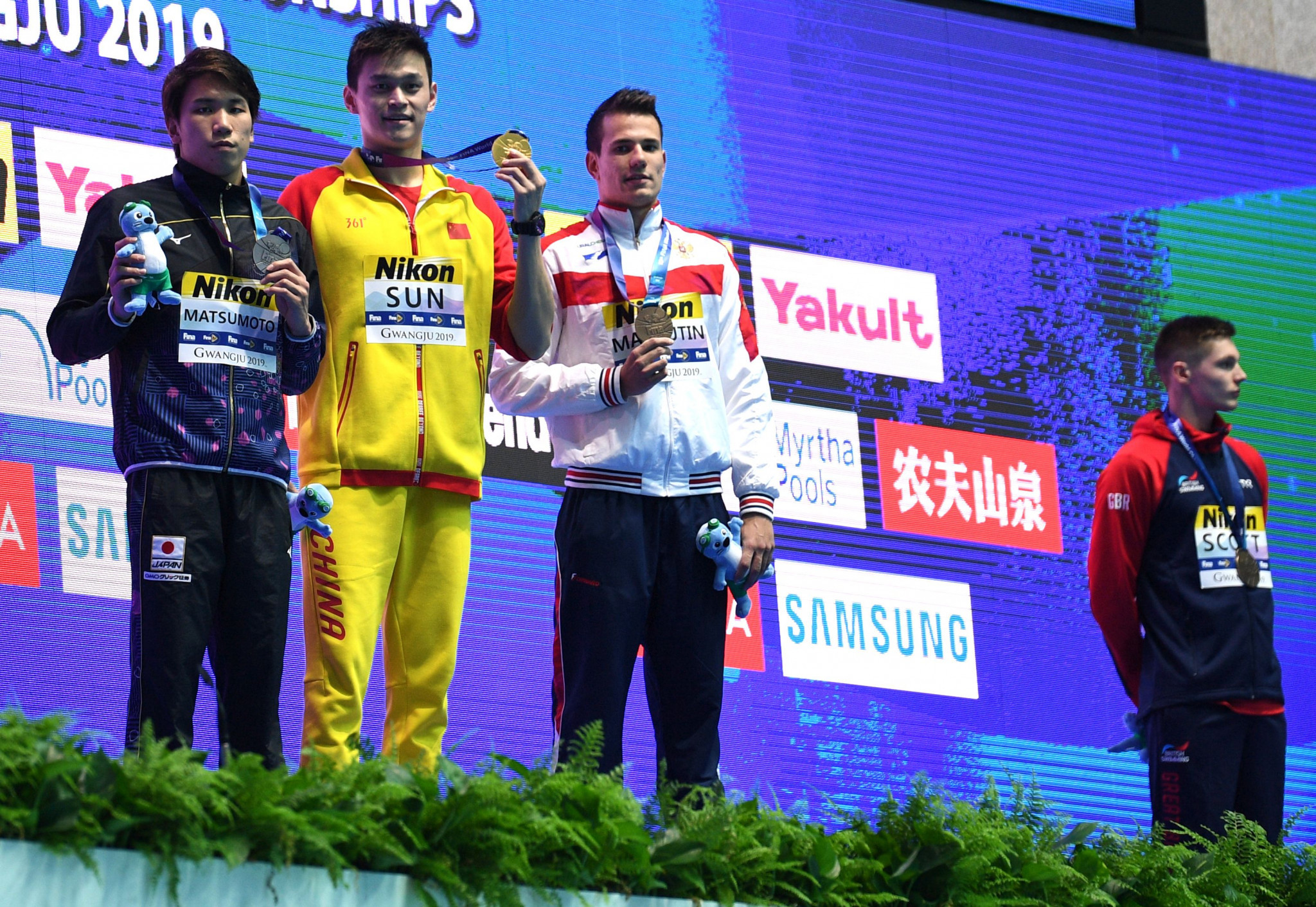 Sun Yang was the subject of another protest at the International Swimming Federation (FINA) World Aquatics Championships after winning his second gold medal in Gwangju.

Britain's bronze medallist Duncan Scott refused to shake hands with the controversial Chinese or pose for photos on the medal rostrum after Sun won the 200 metres freestyle final.

Scott joined Australia's Mack Horton in protesting against Sun, who served a three-month drugs ban in 2014 and is accused of deliberately smashing his blood sample after an argument with testers earlier this year.

Horton, who won silver behind Sun in the 400m freestyle final on Sunday (July 21), refused to step onto the podium entirely and although Scott did follow protocol for the national anthems the Chinese reacted angrily.

Twenty-seven-year-old Sun, who has now won 11 world titles to go alongside his three Olympic gold medals, screamed in Scott's direction as he climbed onto the podium.

After Scott had refused to join him for the customary photos on the top step, the Chinese called the two-time relay world champion a "loser" as the medallists were walking away.

Both Sun and Scott will be sent warning letters by FINA, the same punishment given to Horton.

"If [Sun] can't respect our sport then why should I respect him?

"I think a lot of people, everyone in swimming, got behind what Mack did."

FINA said its Executive Committee met to discuss the incident.

"Both competitors had an inadequate behaviour on this occasion, which is not acceptable in accordance with the FINA Constitution rule C 12.1.3," they said.

Sun avoided punishment from FINA and its doping panel over the alleged smashed sample, instead receiving a warning.

The World Anti-Doping Agency (WADA) has filed an appeal against this decision to the Court of Arbitration for Sport (CAS).

If CAS rules in WADA's favour Sun could receive a lifetime ban after his earlier suspension for prohibited substance trimetazidine.

The Chinese, who has now defended his 200m world title, denies all wrongdoing with the circumstances of his race win today also highly dramatic.

Danas Rapsys of Lithuania touched home first but was then disqualified for a false start to gift Sun, who received a frosty reception from the crowd at the Nambu University Municipal Aquatics Center, victory in 1min 44.93sec.

Katsuhiro Matsumoto of Japan won silver in 1:45.22 with Scott sharing bronze with Russia's Martin Malyutin as both clocked 1:45.63.

Four other swimming gold medals were decided in South Korea today with Lilly King of the United States edging Russia's Yuliya Efimova in a women's 100m breaststroke final which also had a doping subplot.

During the event at the Rio 2016 Olympics there was bad blood between the pair when Efimova, who was given a 16-month drug ban in 2014, celebrated semi-final victory by wagging her finger.

King, who went on to win the Olympic gold, defended her world title today in a time of 1:04.93.

Evgeny Rylov of Russia won silver in 52.67 and Mitch Larkin claimed bronze for Australia in 52.77.

American defending champion Katie Ledecky was not in action as the five-time Olympic and 14-time world champion struggles with illness.

In the women's 100m backstroke Canada's Kylie Masse defended her title by clocking 58.60.

Minna Atherton of Australia won silver in 58.85 and Olivia Smoliga of the US bronze in 58.91.

Away from the pool, the first gold medal was awarded in high diving with Australia's Rhiannan Iffland defending her women's title.

Adriana Jiménez of Mexico won silver for the second-consecutive event with 297.90 as Britain's Jessica Macaulay took bronze with 295.40.

The men's water polo tournament saw the end of Olympic champions Serbia's tournament as they were knocked out on quarter-finals day.

Spain recorded a 12-9 win over a side who also entered the event as the reigning European champions and World League winners.

Reigning world champions Croatia did make it through after beating Germany 10-8 and will now meet the Spanish in the last four.

Hungary pipped Australia 10-9 on the other side of the draw and will play Italy, who were 7-6 winners over Greece.

The men's 800m freestyle, 50m breaststroke and 200m butterfly will all reach a conclusion alongside the women's 200m freestyle and the mixed 4x100m medley relay.

High diving will conclude at Chosun University Football Field with the men's event, while the women's water polo semi-finals are scheduled at Nambu University.

Defending champions the US will play Australia with Spain meeting Hungary.