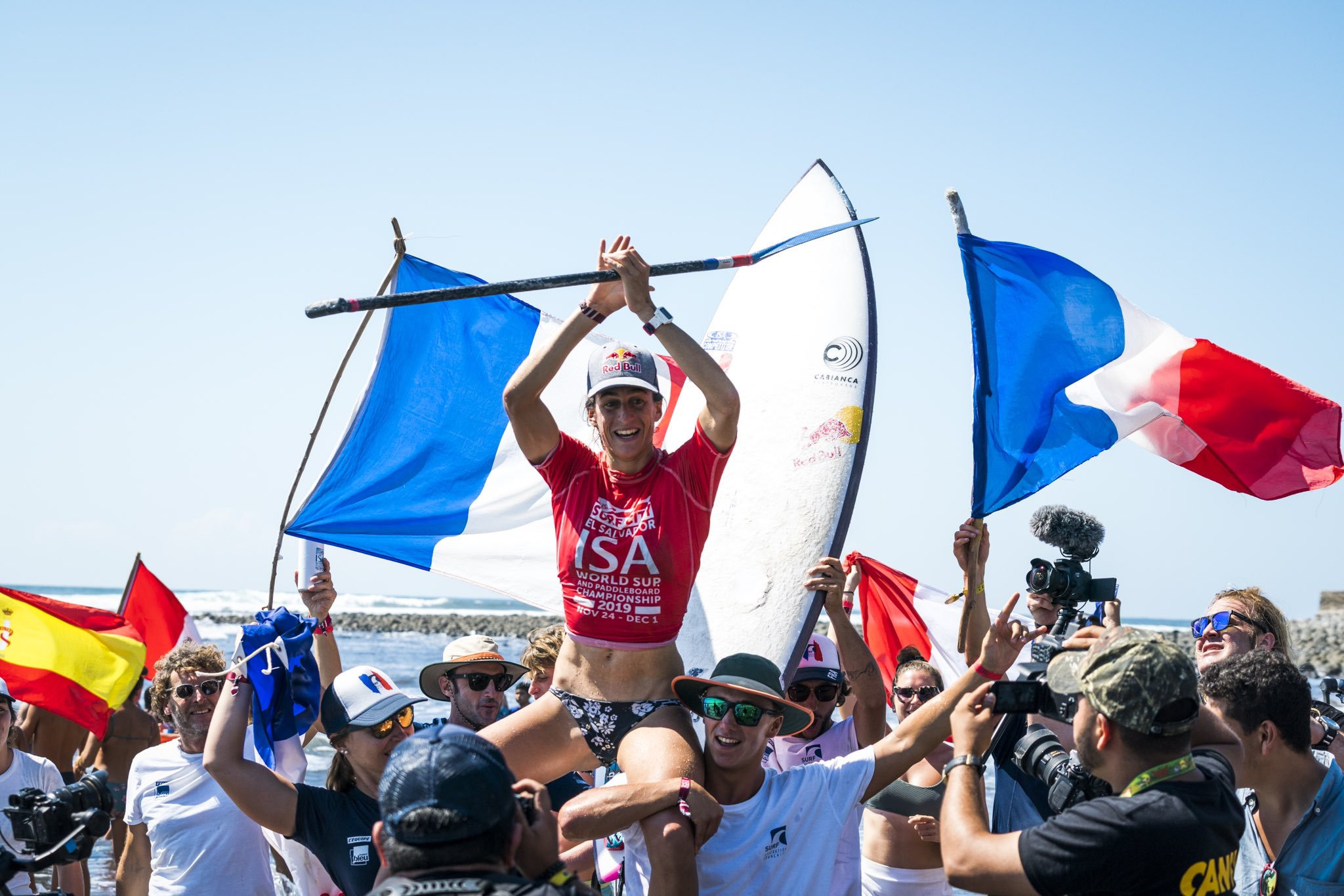 Dupont was called into the French team at the last minute but gave her nation an unassailable lead by unseating defending champion Shakira Westdorp to win the 2019 SUP surf world title.

Westdorp looked on course for a fourth consecutive world title but the in-form Dupont caught a 6.33 wave to leapfrog the Australian with three minutes on the clock to claim gold.

A valiant silver medal went to Westdorp as Iballa Ruano Moreno of Spain took third ahead of Peruvian Vania Torres in fourth.

"I am so stoked and it was a tough call for the federation to believe in me," said Dupont, who only confirmed her availability for the French team two weeks before travelling to Central America.

"I didn't practice that much before the contest.

"I felt a bit of pressure to be with the team but it is so good.

"Everyone wants you to do your best and I love to share the good vibes."

With the overall title already secured, Carpentier saved his best for last as he usurped ISA World Championship debutant Airton Cozzolino in the final minute to take gold.

Needing a 6.50 wave to go top of the standings the Frenchman put together his best wave of the week and the French team went into party mode as the announcer revealed an 8.90 wave that gave him an overall 16.23 tally.

"It was that wave or I was not making it [for gold]. It is crazy and I am so happy to get that wave", said Carpentier.

"This morning I had a shocker in the main round heat so I'm super happy that I found that rhythm again in the repechage and in the finals the same.

"It is crazy that Justine just won.

"She got second in Denmark [in 2017] and I got third so its amazing we both win here and I am so happy for team France."

Italian Cozzolino collected the silver medal as Alex Salazar of Brazil and Riki Horikoshi from Japan rounded out the podium in third and fourth respectively.

A total of 12 podium finishes from 13 events during eight days of competition was the key to the French success.

Amandine Chazot finished second behind Spaniard Esperanza Barreras in both the SUP technical and distance races and collected a copper medal in the sprint race.

Julen Marticorena won gold in the prone technical race and backed that up with fourth position in the junior prone contest to secure crucial points for his team.

With Dupont and Carpentier reaching the grand finals the gold was all but won, before Dupont made sure.

"We are pretty happy and it is the first title for France," said Puyo, who grabbed two gold medals and a bronze to boost the points early in the week.

"We were quite good in every race.

"Justine has just won, I got the gold in prone and technical and the other guys contributed to second and third positions so we were really consistent."