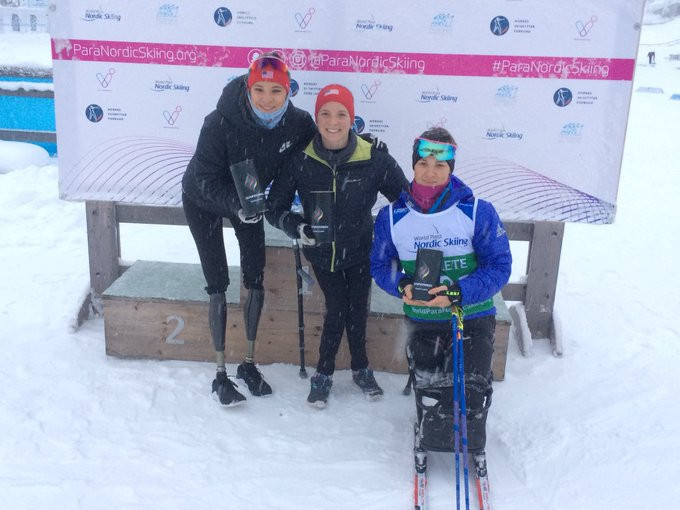 The Paralympic champion topped the podium in the women's sitting sprint event at the Birkebeineren Ski and Biathlon Stadium in the Norwegian town, crossing the line in 19min 33.1sec.

She finished in front of compatriot Oksana Masters, another Paralympic gold medallist at Pyeongchang 2018, who was second in 20:01.7.

Marta Zainullina of Russia was in third place in a time of 20:17.7.

With Gretsch triumphing in both sitting biathlon races and Masters in all three cross-country events, the US finished with a significant medal haul.

"The competition for us this last week-and-a-half has been really good," American coach Gary Colliander said.

"Our men are close, but the field size this year is really deep and really strong - it's nice.

"It's a really competitive field this year."

The women's visually impaired sprint title went to Anna Panferova in 23:08.6, with fellow Russians Vera Khlyzova and Mikhalina Lysova coming second and third with times of 23:21.9 and 25:12.2 respectively.

Ukraine impressed in the standing sprint competitions, as Liudmyla Liashenko triumphed in the women's in 23:46.7.

Compatriot and last season's crystal globe winner Oleksandra Kononova was second in 23:51.4, while Ekaterina Rumyantseva of Russia was third in 24:15.8.

Ihor Reptyukh then won another gold for Ukraine, in the men's standing, finishing in 20:02.6.

Yury Holub topped the podium in the men's visually impaired sprint with 19:50.8, after settling for second-place yesterday.

He had a significant lead over Stanislav Chokhlaev of Russia in 20:33.6, while fellow Belarusian Vasili Shaptsiaboi was third in 21:21.0.

Ivan Golubkov of Russia was the final gold medallist of the day, winning the men's sitting sprint in 16:40.4.

Today's competition concluded the World Cup season-opener, with action due next to take place in Altenberg and Dresden from January 11 to 19.