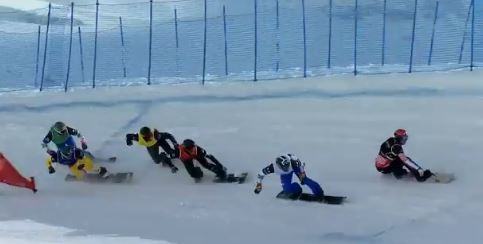 Despite lingering concerns over the bad weather conditions that had caused the previous day’s scheduled qualification to be postponed, both were able to shine in in front of their supporters.

Moioli earned 1,000 points in the second race of the series and is now top of the overall rankings on 1,800.

The 25-year-old from Alzano Lombardo has overtaken the Czech Republic’s world champion Eva Samková, winner of the opening World Cup race but who finished seventh today and now totals 1,360 points.

France’s Chloe Trespeuch was second on the day and now moves into third place in the overall rankings with 1,160 points.

Please enjoy the women's big final of today's SBX race in @CerviniaValt with @michimoioli taking the win ahead of @TrespeuchChloe and Sofia Belingheri 🥳🥳🥳 pic.twitter.com/yu6HbAn8fI

Third place went to another Italian athlete, Sofia Belingheri, who finished one place ahead of Australia’s Belle Brockhoff.

Sommariva led home an Italian one-two as he was followed home by Emanuel Perathoner, with third place going to France’s Merlin Surget.

Austria's Alessandro Hämmerle, winner of the opening men’s World Cup event of the season in Montafon, had to be content with seventh place in Italy.

This is the third consecutive year that the resort, nestled alongside the Matterhorn mountain, has hosted an FIS Snowboard Cross World Cup.