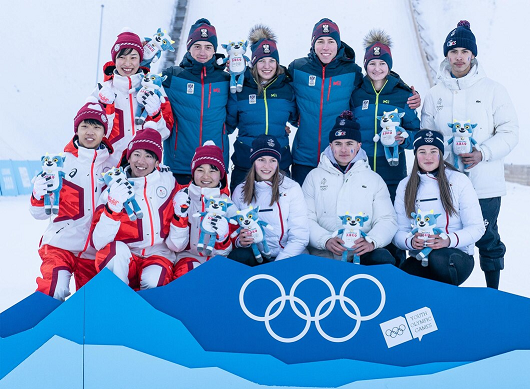 The Austrians were the favourites for the competition as their four-member team included men’s individual champion Marco Woergoetter and Nordic combined gold medallists Lisa Hirner and Stefan Rettenegger.

Julia Muehlbacher completed the strong Austrian line-up, who immediately set the standard in the competition.

Woergoetter achieved the highest points score in his grouping with a total of 131.3, while his three team mates were second in their sections.

It gave the Austrian team a tally of 499.9 points at the halfway mark of the competition and a 28.3-point lead over second place Japan.

Victory was sealed by the Austrian quartet in the second round as they scored a combined 486.5 to end on a winning total of 986.4.

"We are all in very great form and had good jumps, so I already thought of a medal today," said Rettenegger.

"Our trainers are a big part in this, they teach us many good things.

"This is the secret."

Germany had been expected to challenge strongly for the medals, but a disqualification for Michelle Goebel for failing to meet ski regulations put their team out of contention.

There was a close battle for the bronze medal, with Russia, Slovenia and France separated by eight points at the halfway stage of the event.

Russia ended narrowly adrift of the medal positions with a total of 880.4.