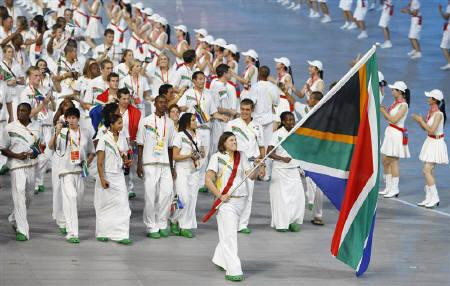 South Africa are set to send their largest team to the Olympic and Paralympic Games in Tokyo since Beijing in 2008 with over 100 athletes already holding qualification standards.

With six months to go until the Games, the South African Sports Confederation and Olympic Committee (SASCOC) announced they would send their largest delegation for 12 years at a press briefing at Olympic House in Johannesburg.

Some of the nation's biggest hopes for an Olympic medal were in attendance, including decorated swimmer Tatjana Schoenmaker, rugby sevens player of the year Siviwe Soyizwapi and artistic gymnasts Caitlin Roosenkrantz and Naveen Daries.

In November 2019 South Africa's Olympic and Paralympic national governing bodies voted to relax the selection criteria for Tokyo 2020, with the estimated size of the team being 228 athletes in 25 sports.

South Africa sent a team of 136 to the Olympic Games at Beijing 2008 and 61 to the Paralympics.

So far,101 athletes have qualified in nine sports for Tokyo 2020 so far for the "Rainbow Nation", including its men's football team.

But there are doubts over the participation of both at Tokyo 2020 with van Niekerk, who set a world record at Rio 2016, still recovering from injuries and Semenya currently challenging new World Athletics rules on "differences of sex development" rules that required athletes with specific disorders of sex development to take medication to lower their testosterone levels.

It was their best medal tally at an Olympics in 64 years where they also won 10 medals in Helsinki in 1952.

At London 2012 had their best Olympics in 100 years, winning four gold medals in athletics, rowing and swimming.

Pre-Games training camps have also been announced for athletics, who will be in Machida City - a 90-minute drive from Tokyo.

Rugby sevens will stay in Kagoshima City before coming to the Olympic Village, with swimming opting to not use a training camp and will go straight to the Village when it opens.

Before the Paralympics, wheelchair tennis an swimming will attend a pre-Games training camp in Iizuka City in Fukuoka Prefecture.

The first South African team announcement is expected to be made in late April.