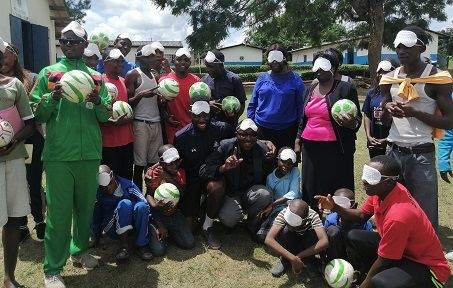 The IBSA revealed that players and teachers took part in 10 hours of coaching during the two days, with local television covering the first day.

A total of 20 players and 10 teachers participated in the second clinic, which was arranged at the at Ndola Lions School for the Visually Impaired in Ndola, close to the border with the Democratic Republic of Congo.

Ball control, dribbling and shooting were the focus of the clinic, with a match taking place at the end of the event.

The Paralympic Association of Botswana followed Zambia by organising a five-day coaching event at the Ba Isago University.

The coach featured nine participants in a village outside the country’s capital city Gaborone.

The first two days focused on the history and rules of blind football and footage in the classroom, along with working on orientation and mobility, ball control, dribbling, and shooting on a five-a-side pitch.

Team play, small sided non-contact matches and a full match were the focus of the final three days of the clinic.

The IBSA have welcomed the courses, with their Football Committee committed to expanding the Paralympic sport worldwide and introducing new countries to the game.

The governing body claimed a core area of focus for the Committee is the development of blind football in Africa.

It comes with the inaugural IBSA Women’s Blind Football World Championships due to take place later this year in Nigeria, which they expect will attract more African countries to the sport.

Nigeria, Ghana, Zimbabwe and Niger are among African nations to have investigated in blind football over the past three years.