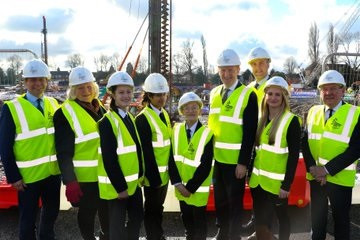 Organisers of the 2022 Commonwealth Games in Birmingham have today held an event to mark the start of major construction of the Sandwell Aquatics Centre.

The event took place on the construction site for the Sandwell Aquatics Centre, the setting for the swimming and diving at Birmingham 2022, on Londonderry Playing Fields in Smethwick.

The venue, it is claimed, will be a vital, state-of-the-art leisure facility, for local people to use and enjoy for years to come.

Additional facilities will include activity studios, sports halls and a fitness suite.

There will also be a football pitch and an urban park on the site too.

Representatives from the project were on hand to explain exactly what is being built and to provide an overview of the current work on the site and what is to come.

Oliver Dowden, the Secretary of State for Digital, Culture, Media and Sport, and Nigel Huddleston, Minister for Sport, Tourism and Heritage, joined local school children and Commonwealth Games partners for a tour of the site.

"2022 will be a great year of celebration and the new aquatics centre will put Sandwell right at the heart of the Commonwealth Games," Dowden said.

"We're investing £600 million ($773 million/€704 million) in the Games to deliver the biggest event the West Midlands has ever seen and leave a lasting legacy, in this case by converting the world-class facilities being built here into a state-of-the-art leisure centre for local people."

We're so excited work is now well under way on the Sandwell Aquatics Centre.

Here with @birminghamcg22 and Secretary of State @OliverDowden @DCMS to look at progress on construction.

The centre will host swimming and diving at the Birmingham 2022 Commonwealth Games. pic.twitter.com/mP3Wj2zLl1

Ian Reid, the chief executive of Birmingham 2022, added: "We are delighted that major construction has now started at the Sandwell Aquatics Centre.

"This is a hugely exciting moment for us as organisers of the Games, as this fabulous centre is going to be one of the jewels in the Birmingham 2022 crown, especially as it’s the only brand-new competition venue being built ahead of the Games.

"It’s great to see how much progress has already been made on site and I’m looking forward to receiving regular updates over the next two years."

Last month, Wates Construction was officially confirmed as the main contractor for the Sandwell Aquatics Centre.

The project is due to be finished and handed over to Smethwick Council by May 2022.

Since the appointment of Wates last year, project costs have increased by £13 million ($17 million/€15 million) from its original budget of £60 million ($77 million/€71 million) announced in January 2018.

Sandwell Council is contributing £27 million ($35 million/€32 million) to the cost of the project with £38.5 million ($49.6 million/€45.2 million) coming from the overall Birmingham 2022 Commonwealth Games budget, and a further £7.6 million ($9.8 million/€8.9 million) being funded by other external partners in Sport England, Black Country LEP, Sandwell Leisure Trust and the University of Wolverhampton.

Chris Jones, the Aquatics Centre’s project director, has previously claimed that the cost now includes a 20 per cent contingency and it is not over-budget.

Ground-breaking took place in September 2019 to prepare the site for construction.

Today's event comes amid doubts about funding for the Birmingham 2022 Athletes' Village.

It was revealed earlier this month "cost pressures" mean it is not possible to build the Village in Perry Barr as planned within its estimated £492.6 million ($635.4 million/€579.4 million) price tag.