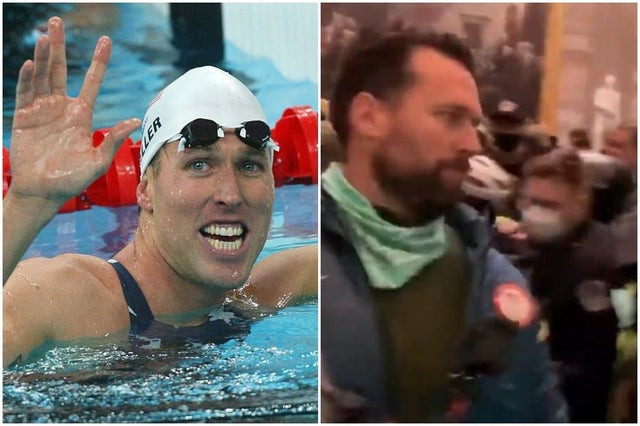 Olympic swimming gold medallist Klete Keller has pleaded not guilty to seven charges over the invasion of the United States Capitol by a pro-Donald Trump mob in January.

Keller entered the not-guilty pleas during a video hearing, and his next court appearance is due on April 6.

Keller, who is 6ft 6in tall, was identified in video footage taken inside the Capitol Building, in part because he was wearing a US Olympic Team jacket.

Five people, including a police officer, died during the riot on January 6.

The Hill reported that Keller was released on bond after being arrested last month.

Keller deleted his social media accounts after news of the charges against him became public.

Swimming website SwimSwam reported that prior to the deletion, Keller had written several posts in support of Trump.

Keller won Olympic gold medals as a team-mate of Michael Phelps in the 4x200 metres freestyle relay team at Athens 2004 and Beijing 2008.

During the Athens 2004 relay Keller followed Phelps, Ryan Lochte and Peter Vanderkaay, holding off multiple Olympic champion Ian Thorpe in the anchor leg to win the race by 0.13 seconds and thus inflicting the first defeat for Australia in the event for more than seven years.

Trump became the first US President in history to be impeached twice after he incited the mob to invade the Capitol, although he was acquitted after the Senate fell 10 votes short of the two-thirds majority required to convict high crimes and misdemeanours.