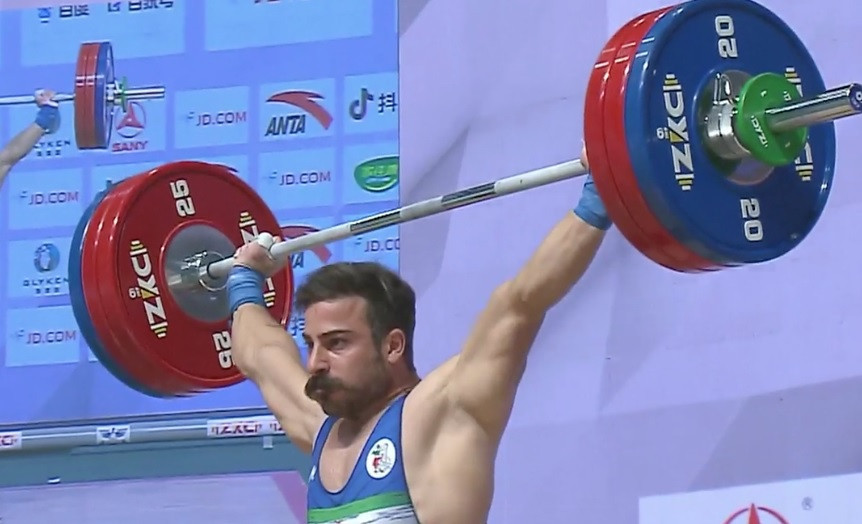 Kianoush Rostami won an Asian Championships gold medal but he could not have looked unhappier on the platform and the podium in Tashkent.

Rostami, one of the world’s most popular weightlifters who has won gold and silver at the past two Olympic Games, is clearly still seething about his failure to qualify for Tokyo 2020.

The 29-year-old Iranian has the third highest total at 96kg in Olympic qualifying but sits 32nd in the rankings because he scored zero points in the second phase.

For that he blamed a mix-up by officials at the 2019 International Weightlifting Federation World Championships and his own federation for an administrative delay in entering him for a qualifier in Switzerland 18 months ago.

He was still mumbling about Switzerland on camera after winning at the non-Olympic weight of 89kg in Tashkent.

Rostami also complained about having to lose weight, though he is said to have asked to compete at the lower Olympic weight of 81kg in Uzbekistan.

He appeared to say that he could not perform well because he had "a lot of stress" and looked totally disinterested as he made two good lifts and missed with four.

He simmered as he walked off the platform, having barely attempted to lift the barbell above his knees, and his coaches did not look happy either.

Rostami had a bomb-out at the 2019 World Championships, one of four in his past eight appearances.

His victory at 85kg at Rio 2016 was one of the highlights of the Games, and Rostami will be missed in the delayed Tokyo Olympics.

His team-mate Sohrab Moradi - whom Rostami believes is favoured by the Iranian Federation - competes in the 96kg tomorrow but because of injuries during qualifying he, too, is highly unlikely to make it to Tokyo.

Ilya Ilyin was in the arena, offering support to the young Kazakhstan lifter who finished second to Rostami - Nurgissa Adiletuly.

Zhang Wangli of China will go to the top of the Olympic rankings after her victory in the women’s 76kg, in which she made 115-148-263.

Second place went to Korea’s Kim Suhyeon on 244kg and third to Kristel Macrohon of the Philippines on 225kg.

In the same weight category at the Pan American Championships in Santo Domingo, Dominican Republic, the favourite Neisi Dajomes of Ecuador was a clear winner with 115-135-250.

Kate Nye of the United States was second on 235kg and Maya Laylor had five from six for 229kg in third.