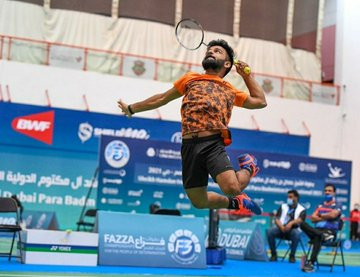 Krishna Nagar has set his sights on gold after becoming one of the latest three Indian Para badminton players to qualify for the rearranged 2020 Paralympic Games in Tokyo through the Badminton World Federation (BWF) rankings.

Nagar, who competes in the SH 6 - Short Stature category, has been named along with Pramod Bhagat, who is in the SL3 - Standing Lower category and Tarun Dhillon from the SL4 - Standing Lower class to compete in the Games due to run from August 24 to September 5 where badminton will be making its first appearance.

"It’s a proud moment for me that I will be part of the Paralympic Games when Para Badminton is making its debut," Nagar said.

"And I will definitely try to make it memorable by winning the gold.

"My sole focus is standing on top of the podium.

"With the COVID-19 pandemic bringing anxiety and crisis to the world I hope to bring smiles and happy moments for the countrymen through a medal in Tokyo 2020.

"This will be also a motivation for many upcoming Para-athletes."

The 21-year-old from Rajasthan, who earned two gold medals at the Dubai 2021 Para Badminton International held in early April, added:

"I had settled for the bronze at Asian Para Games 2018 and Basel 2019 World Championship, so I don't want to miss the gold this time.

But he is aware that that task will not be easy at the Games given the presence of strong players in his category such as Jack Shephard of England and Hong Kong’s Chun Mai Kai.

Bhagat, meanwhile, said he is highly motivated to do well at the Paralympics now that he has officially qualified for the event.

So far, five Indian players have received official invitations from the BWF for Tokyo 2020.

Chief national coach Gaurav Khanna is confident that India will have three more players in men’s singles SL3, SL4 and mixed doubles events when the final list is released on July 16.

The women’s doubles pair of Parul Parmar in the SL3 and Palak Kohli in the SU5 were the first Indian pair to receive the confirmation on their qualification.

"I am expecting a medal each from all the players going to Tokyo," said Khanna.

"Tarun, Pramod and Krishna are strong contenders for gold medals.

"Meanwhile, it’s a proud moment for someone so young like Palak qualifying for the Games.

"Training is going on full swing.

"We are fortunate that now we have a dedicated Badminton Academy for the Para badminton players, so even if there's a lockdown our players have a place to train in.

"The spirit in the team is also very high and we are working hard towards our goal.

"There is also a system in place for each player which will surely help them deliver a medal-winning performance in Tokyo."