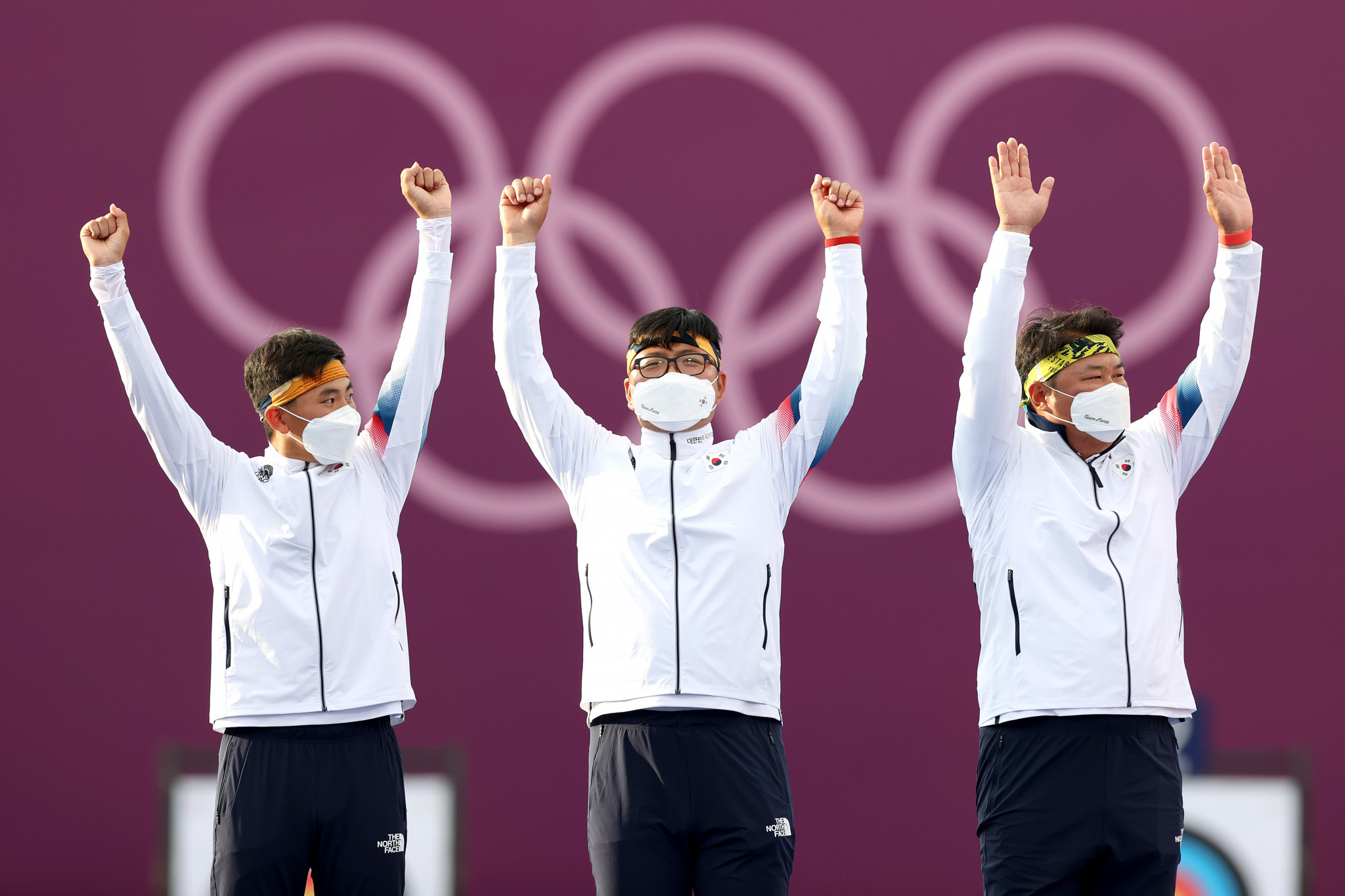 South Korea's dominance of the archery events at the Tokyo 2020 Olympic Games continued as its men's team of three delivered a masterclass with the bow and arrows to overcome Chinese Taipei in today's final.

The country had won the mixed team and women’s team events over the weekend, and Oh Jin-hyek, Kim Woo-jin and Kim Je-deok ensured it would be three out of three at Yumenoshima Park Archery Field.

Kim Woo-jin was also part of the gold medal-winning team at Rio 2016, and South Korea has now won the event at five of the last six Olympics.

It has also won the women’s team event at all nine Olympics since it was first held at Seoul 1988.

Having topped the ranking round, the South Koreans whitewashed India in the quarter-finals, but required victory via a shoot-off point after tying with Japan in the semi-finals.

Both teams scored 28 in the shoot-off, but 17-year-old Kim Je-deok's 10 was closer to the centre of the target than his opponent Yuki Kawata’s - sending South Korea through to the final.

Chinese Taipei had advanced through their pre-quarter-finals elimination match against Australia via a shoot-off point earlier in the day, then proved too strong for China and The Netherlands in the quarter- and semi-finals respectively.

However, South Korea were looking unbeatable come the final, scoring an astonishing 59 and then 60 in the first two sets, before two 10s at the end of the third set saw them edge it 56-55 and secure a straight-sets victory.

Kim Woo-jin said the combination of talents in the South Korean team had them on the right track.

"Oh Jin-hyek and I have done a lot of international competitions as a team, so we have a lot of experience in the team matches, but we have been training with Kim Je-deok for around a year, maybe," Kim said.

"It might be a short time, but I feel it isn’t.

"Today we have done so well as a team and I’m satisfied with our performance."

Chinese Taipei's silver matches the country's previous best performance in the event at Athens 2004, while Japan saw off The Netherlands to clinch bronze.

After their semi-final heartbreak, Japan had more luck in their shoot-off against the Dutch in the bronze-medal match as Hiroki Muto found the centre to secure the host nation's first-ever medal in the men’s team event.

Takaharu Furukawa, the third member of the team, expressed his pride at that achievement.

"This is the first team medal that a Japanese team wins in the Tokyo Olympics, so we are very happy," Furukawa said.

"We are very glad that we delivered this medal."

Japan had beaten the United States in the quarter-finals earlier in the day.

Individual events in the archery begin in earnest tomorrow, with the women’s competition drawing to a close on Friday (July 30) and the men’s a day later - an event that Oh won at London 2012.